We've gotten used to seeing Matt Damon play the hero and all-around good guy, but his megawatt smile comes with an ulterior motive in the trailer for Promised Land. Damon plays salesman Steve Butler, who is sent to a rural town with intention to convince the residents that they should allow their land to be exploited for natural resources in exchange for money. It's all going swimmingly until one of the residents (John Krasinski) stands up to Steve and rallies the community to protect their land. 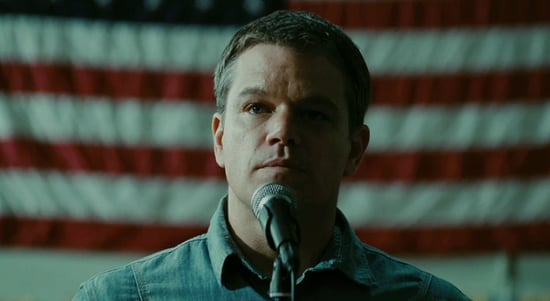 Gus Van Sant's upcoming film seems like a predictable underdog story (the inspiring music in the preview only adds to that), but that's not necessarily a bad thing. I love that Krasinski and Damon cowrote the script together, and the supporting cast includes Frances McDormand, Hal Holbrook, and Rosemarie Dewitt (who, apparently, is in every movie these days). The film comes out Jan. 11, but take a look at the trailer when you read more.

Shirtless
After Seeing These Pictures of Resort to Love's Sinqua Walls, We're Going to Need a Minute
by Grayson Gilcrease 9 hours ago