Ryan Reynolds sure looks great for a dead guy in the trailer for R.I.P.D., where he plays Nick Walker, a Boston cop who gets killed in the line of duty but is soon called in to another job. Nick is recruited to the R.I.P.D., a supernatural force that hunts down "deados" (you know, dead bad guys). Helping him navigate the new job is his partner, fellow deceased officer Roy Pulsipher (Jeff Bridges), a cowboy who's got some Colonel Sanders facial hair, mean-looking six-shooters, and a gruff attitude. 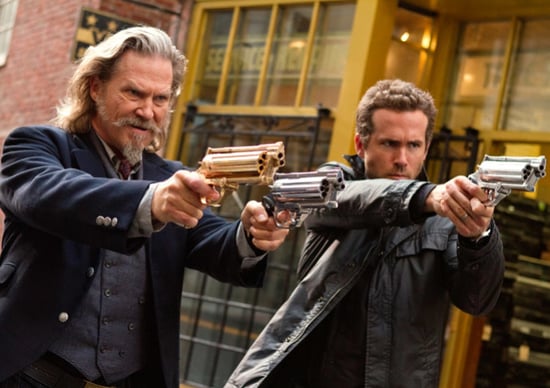 I did chuckle a little bit at some points during the trailer but in general, this movie looks pretty dumb. It doesn't help that it seems exactly like Men in Black, only with dead people instead of aliens. At least it has the benefit of easy-on-the-eyes Reynolds and his potentially good chemistry with Bridges. R.I.P.D. comes out this Summer on July 19, and you can check out the trailer after the jump.

Movies
Who Plays Borat's Daughter, Tutar? We Finally Have an Answer
by Amanda Prahl 6 hours ago