When you sign up to watch a movie about boxing robots, chances are you want to see mechanical carnage, and plenty of it. In Real Steel, Hugh Jackman stars as Charlie, a man who makes his living piecing robots together and sending them to the ring, so the potential for spectacular robotic clashes is high. But when Charlie's estranged son Max (Dakota Goyo) shows up on his doorstep, what you get instead is a predictable father-son story that's a swing and a miss. 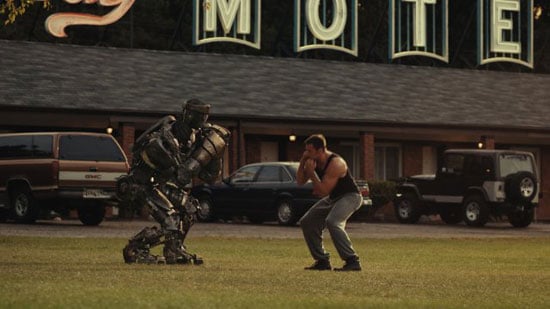 The film is set in the not-too-distant future, when machines have taken over the role of boxers because humans are hungry for more gore. The premise is a bit hard to believe — how do bolts win over blood, and why would sports fans be more invested in a machine than a human? On that note, the film barely lets the audience begin to connect with the beat-up, underdog robot Max uncovers in a junkyard, paying more attention to the relationship between the boy and his dad. When Max just so happens to share his father's passion for robot boxing, the film establishes a convenient means for the pair to bond. To find out why else you can pass on a ringside seat to this film, just keep reading.

Charlie is exaggeratedly gruff throughout the first half of the film, making him pretty unlikable. When he first gains custody of Max, he shows the boy, who has just lost his mother, no sympathy. He tosses him the occasional cheeseburger or can of cola, tells him to shut up, and tries to unload him on his former girlfriend Bailey (Evangeline Lilly). As the spunky Max, Goya keeps pace with Jackman's surly character, nailing quippy one-liners and bringing just the right amount of cuteness and sass to scenes like those that have him dancing a hip-hop routine with his robot, or excitedly rooting for the machine from the sidelines. 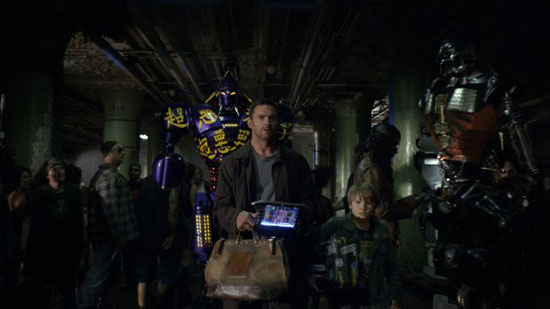 While Charlie initially resists his son's charms, as soon as Max finds his rickety robot and starts sprucing him up, it's pretty clear the two will come together to train the 'bot. Charlie, a former fighter, has the boxing know-how to teach the machine winning moves, while young Max somehow possesses the technical know-how to modernize the older robot. Their areas of expertise complement one another so perfectly, it's a given they will become an inseparable team.

As spectators to the robotic matches, you may not be as thrilled as Max unless you too are an 11-year-old boy. Max's robot is an older model, but the film's modern boxing machines have little in the form of high-tech tricks to impress us in the ring. One robot has two heads, and another is powered with voice command recognition, but watching people use hands-free technology is boring.

The fights play out like real-life video games, complete with competitors controlling the machines from computers and hand-held devices. Tween boys might get a kick out of seeing their games come to life, but even they might not have the patience for the sappy father-son tale — I know I didn't.

Movies
Yes, Dune Is a Remake of a 1984 Movie, and It's Being Modernized in Multiple Ways
by Ashley Broadwater 15 hours ago