Forget the Emmys, because this week on Mad Men, there's another coveted trophy: the CLIO awards! Don, Pete, Joan, and Roger attend the ceremony, where the agency (well, mainly Don) is up for honors for its Glo-Coat ad. 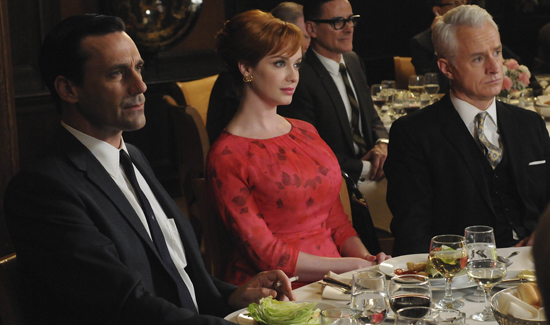 The win creates some jealousy, as Roger envies Don's prize — and the fact that Don kisses Joan probably doesn't help, either. Do you think the writers are setting the men up for a friendship fallout? At least they have one thing in common: they both love booze. Don spends most of the episode in a drunken haze where he doesn't remember anything. Luckily I do, so let's recap when you read more.

What did you think of the episode? It really felt like the show was putting Don up on a pedestal only to knock him down, and I loved it. Let me know your thoughts in the comments, or join the group It's a Mad, Mad, Mad Men World in the BuzzSugar Community to chat some more!