Good news if you thought that 2010's surprise hit about retired black-ops agents Red was a great time, because Bruce Willis and co. are back for another spin. Though Frank (Willis) is happy living a relaxed, nonviolent life with Sarah (Mary-Louise Parker), he gets pulled back into another mission by Marvin (John Malkovich) and Victoria (Helen Mirren). This time, the villain is a glam and mysterious Catherine Zeta-Jones, whose character appears to have a rather intimate past with Frank (or she's just really, really friendly). 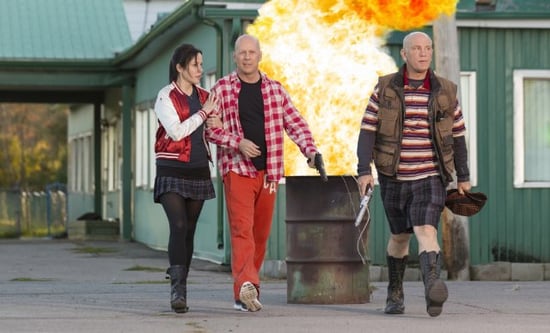 The sequel has the same kind of quirkiness as the original and plenty of action, but as with the first installment, the real draw here looks like Mirren, who's both beautiful and badass as a former CIA agent. Red 2 comes out Aug. 1, and you can get a look at the trailer now after the jump.

Halloween
This TikToker Re-Creates Iconic Scenes From Your Favorite Movies, and They're Hilariously Spot-On
by Yerin Kim 14 hours ago

Netflix
Warning: These Hot Movies on Netflix This November Should Be Handled With Oven Mitts
by Corinne Sullivan 7 hours ago