This week's Revenge has me yearning for the simple days of last season. Remember last Summer in the Hamptons? It was just one girl, out to take down the family that killed her father. Well, no more. Now we've got a dead white-haired man, illegitimate children, fake kidnappings, and at the center of it all is the Grayson family. This week, they're forced to stand together against the media after a surprising display of truth on Victoria's part. Jack is having some baby-mama drama with pseudo-Grayson Amanda, and Emily uncovers a startling truth about her mother. 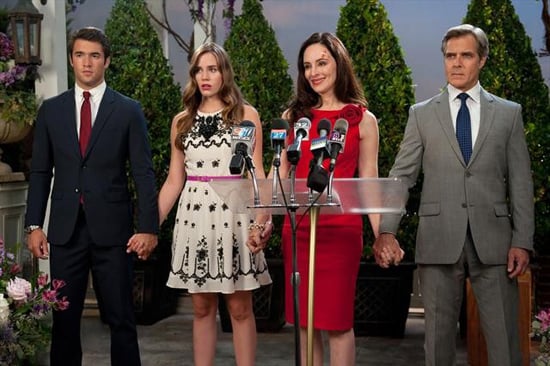 There's not enough therapy in the world that can quell the extreme discord in the Grayson home, and I'm loving the dysfunction. I'm counting down the week's biggest scandals when you read more.

Other burning questions: Will Nolan get with Padma, and am I the only one still sensing something fishy from her? How good was Aiden's American accent? Will Daniel ever catch up to his family's insanity?