I want to begin the discussion of this week's Revenge with the most exciting news: Mason Treadwell, slimy journalist extraordinaire, is back — and his hair is crazier than ever! Yes, the morally challenged, Sinatra-whistling dirt digger has returned, but he's not the only one pushing his luck with the high society of the Hamptons. The estranged Kara has also taken little time to ingratiate herself with the Graysons, though they're not buying her schtick. Meanwhile, Nolan's new love interest might be bad news, and Creepy McGee still wants to buy the bar out from under new daddy Jack. 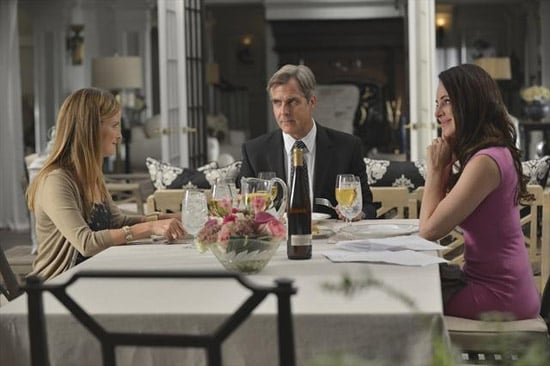 At long last, this week also saw Emily's reunion with Kara, though only Emily knew who she was. Oh, the pain! Let's go ahead and break down this week's biggest scandals when you read more.

All in all, this week's episode provides some key moments of the season so far. Between Emily's encounter with Kara, Kara's encounter with Amanda, and Jack and Nolan's bro-hug at the hospital, this is one for the books. What did you think of "Forgiveness"?