After viewing this week's episode of Revenge — aptly titled "Identity" — it's more obvious than ever that the show has lost its way. Since when am I supposed to be feeling pity for Victoria, who has requested help from an unlikely ally in search of her long-lost firstborn son? Why should I care about Charlotte, the poor little rich girl turning to a life of meaningless club-hopping and making out with girls in alleyways? Remind me: who is getting revenge on whom? I used to be firmly invested in the saga of Jack and Emily, and lately Jack is just getting on my nerves. This is one frayed revenge plot, if you ask me. 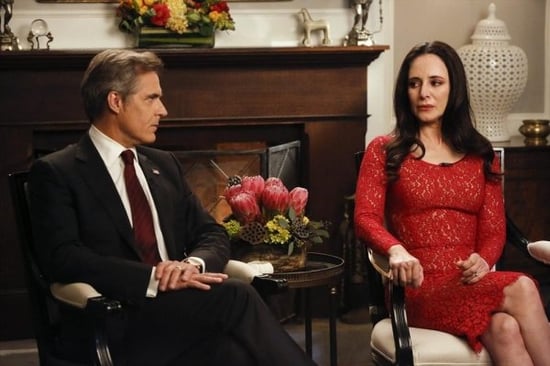 Despite the fact that the show is off the tracks, "Identity" does have its share of gasp-worthy moments as the Graysons are put on the spot during an in-home interview. Let's go through this week's biggest scandals when you read more.

What did you think of "Identity"?

Netflix
Where Is Selena's Husband Chris Pérez Now?
by Camila Barbeito 15 hours ago

Netflix
How Selena's Family Was Involved in the Production of Netflix's Selena: The Series
by Camila Barbeito 17 hours ago

Matthew Perry
Matthew Perry Just Dropped a Chandler Bing Merch Collection — Could This BE Any More Amazing?
by Yerin Kim 18 hours ago

Star Wars
ICYMI, This Is What Moff Gideon Really Wants From Baby Yoda on The Mandalorian
by Amanda Prahl 19 hours ago