What a tangled web Revenge weaves! And black widow Victoria Grayson is at the center of it all. The show takes some interesting and unexpected turns this week, as it opens on a bloodied Grayson manor as a grimacing Victoria feeds the fire with a stained sign-in sheet and crumpled check. What could have transpired here? And why is that maid so calm about sopping up gallons of blood? The episode answers these questions — well, one of them, anyway — and creates many more. Emily's mom is back in the fold, Nolan gains a lady friend, Daniel is getting hip to the con game, and someone is out to get Jack's bar. 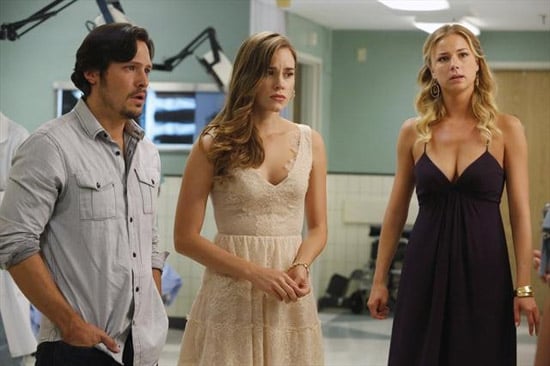 This is by far the soapiest episode of this season, deliciously filled with meaningful pauses and dramatic music swells. Thus, cue the music, and let's talk Revenge when you read more.

Other questions that arose: am I the only one who was really uncomfortable when Amanda reads Victoria entries from her fake father's fake journal about their love affair? Is there even a speck of chemistry between Daniel and Ashley? Does no one tell Daniel or Ashley about Amanda's fall from the balcony? Despite the circumstance, how cute is it to see Charlotte and Declan together again at the hospital?

PBS
It's a Sad Day in Elwood City: Arthur Is Coming to an End After More Than 2 Decades
by Kelsey Garcia 16 hours ago