It may have taken the death of a major character, but after this week's episode of Revenge, it looks like Emily has finally rediscovered her primary purpose. Amanda is dead, her body recovered by the coast guard. Jack, gripped with grief, is struggling to put the pieces back together. He's getting some of it right, but his accusations are suffering from a case of mistaken identity. Charlotte is also attempting to come to terms with her "sister's" passing — will she ever realize Amanda wasn't related to her? "Retribution" is slower than most episodes, but I think that's a positive thing. Lately I've found the show to be packing so much in, but not all of it is good. 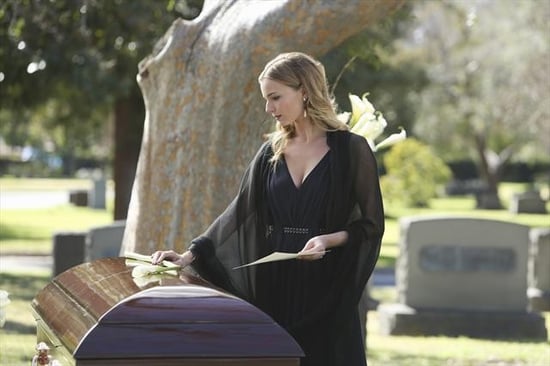 I'm looking forward to seeing Emily go back to basics, even if she's coping with the guilt of Jack's discoveries and accusations. Let's go through this week's biggest scandals when you read more.

Other questions: Does Mr. Trask sound like Christian Bale as Batman to you? How glad are you that you didn't have to identify Amanda's body, like Charlotte does?

TV
We Can't Wait to See Javicia Leslie's Batwoman Suit in Action: "[It's] Her Moment!"
by Grayson Gilcrease 2 hours ago

HBO
The Undoing's First Season Is Short and Sweet, So It Won't Be Long Until the Killer Is Revealed
by Monica Sisavat 4 hours ago