This week's Revenge finds our recently wayward heroine getting getting back on track with her plans for vengeance, with a little unexpected support. Emily's foster brother, Eli, is in town, and guess what? After burying "Amanda," he knows Emily's real identity and calls her out on it. Meanwhile, Nolan is busy trying to help Padma get her father back from the Initiative (that plan goes less-than-smoothly), and Jack has really started to annoy me. I know his wife just died, but maybe it's time to let it go and stop with the amateur Hardy Boys routine. 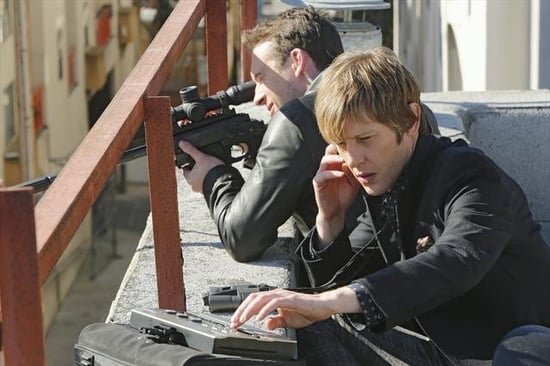 The best part of "Victory" is that Eli seems intent on helping her get back on track to destroy the people who wronged her, starting with their former caretaker. Let's go through the week's biggest scandals after the jump.

Who's excited for next week's masquerade party?

Netflix
Virgin River: Everything You Need to Remember About How Season 1 Ends
by Hedy Phillips 4 hours ago

TV
Before the Dr. Death Adaptation, Read Up on the Chilling True Story of Christopher Duntsch
by Stacey Nguyen 6 hours ago

Schitt's Creek
If You Love Schitt's Creek, These Rose Apothecary Sweatshirts Belong in Your Closet
by Kalea Martin 7 hours ago