If last week's episode of True Blood was low on the gore factor, the latest more than made up for it. From stakings to torture to one very cringe-worthy bite, there's a whole lot of bleeding going on. Between the panel at Comic-Con, the hot new preview video, and my chat with Marshall Allman, some of the surprises were previously spoiled — but there's still plenty to sink our teeth into. 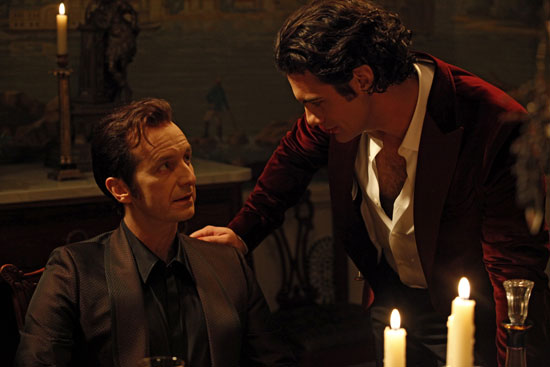 Ready to gush about this week's happenings? Read on, my friends.

Best cat-like moves: When Bill is dragged back to the house by Russell and Eric, he shows off some serious vampire power and quickly stakes one of Russell's thugs. It's a blink-and-you'll-miss-it maneuver, though there's no mistaking those vamp innards on the floor. Unfortunately, even at his best, Bill is still no match for the King and Lorena is ordered to kill him.

Best burn: Lorena's "I would like to rip you open and wear your rib cage as a hat." Sookie and Lorena banter like two high school girls fighting over the quarterback, but if these ladies ever went at it, my money would be on Lorena. That girl is not messing around.

Most effective way to shut someone up: Eric clamps his hand over Sookie's mouth, which later leads to a nasty confrontation between the two. Eric says he doesn't care for her at all, continually refers to her as "it," and refuses to help Sookie rescue Bill. Seems like Eric is gunning for Russell's position as King (he does say that he's after something he's wanted since before he was a vampire), but Sookie promises him that she'll get revenge on him for not saving Bill.

Best actress: Poor Tara really had to step up her game this week to fool Franklin in her ongoing attempt to avoid being turned into a vampire. It's all fun and games until she has to actually bite Franklin to keep him believing that she's ready to be his bride. The scene is funny and gruesome at the same time (mostly thanks to Rutina Wesley's awesome facial expressions), but I'm pretty sure I saw her chewing on vamp flesh. Ewww.

Worst customer service: Jessica glamors an irritating customer into leaving a bad tip for Arlene. Then, Jessica rewards herself by using her for a snack.

Best way to channel Madonna: Jason tells Crystal that she makes him feel "like a virgin." Uh, right. Add that to the Jason Stackhouse guide to seduction, why don't we? Sadly for Jason, their makeout session doesn't go much further when he jokes about love hurting, because Crystal isn't into tough love. Later on, we see why — Jason shows up with flowers but her fiance isn't exactly impressed. Crystal blows him off, prompting the cutest hurt puppy dog face you ever did see to appear on Jason's face. Whether or not he understands the situation is unclear (this is Jason, after all), but it's pretty obvious to everyone else that Crystal's got herself stuck in an abusive relationship.

Biggest flirt: Oh boy, did Eric turn on the homoerotic charm this week. From playing games with Talbot to following Russell around like a suck-up, it's unclear whether Eric is actually coming clean with his sexuality or it's all just an act to get what he wants (my money's on the latter). His flirtation could be beneficial for multiple reasons: not only can he get in better with the King (and possibly get between Russell and Talbot), but it also helps his case that he has no feelings for Sookie.

Best new explanation for Sookie's superpowers: I nearly spit when Sookie suggests to Russell that she might be an alien . . . and then goes on to cite an example from the movie Aliens. In a world where it's normal for shapeshifters, werewolves, maynads, and vampires to exist, it would be pretty interesting if Sookie's actually from another planet.

Best knight in shining armor: I cheered when Jesus jumps out of the bush to fight off the jerks that are smashing Lafayette's car. Unfortunately the happy moment turns sour when Jesus overhears that Lafayette is a drug dealer. Does this mean Lafayette will give up his side job for love? My vote is yes.

Biggest bloodbath: Man, oh man, is there a lot of blood down in the torture chamber. Not only does Lorena use all kind of devices to torture Bill, but she's also got her own bloody tears continually running down her face. To top it all off, she lets Coot and Debbie Pelt drink from his body (and throw in some extra jabs and kicks of their own). The real clincher, though, is when Sookie comes to Bill's rescue — and Lorena wins the catfight by clamping her fangs right into Sookie's neck.

Next week we'll follow Sookie to the hospital, but will Lorena set Bill free? How far will Eric go to be the king? And what new lengths of crazy will Franklin go to once he realizes what Tara's done? Share your comments below, and check out the True Blood Southern Vampire Series group for even more fun!

Netflix
Virgin River: 3 Theories About That Cliffhanger Ending in the Second Season
by Kelsie Gibson 16 hours ago

Supernatural
Supernatural (Kind of) Made Destiel Canon, and Then Everything Went Terribly Left
by Mekishana Pierre 17 hours ago