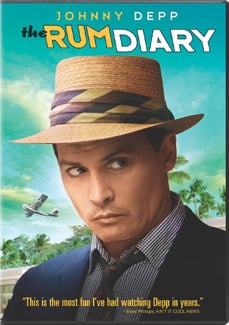 In this adaption of Hunter S. Thompson's novel, we follow the wild escapades of Paul Kemp (Johnny Depp), an American journalist who takes a job at a newspaper in Puerto Rico in the '50s. Although Paul has every intention to report on the important news of the region, he just can't say no to a good party. While the location is absolutely stunning (as is costar Amber Heard) and Depp has some seriously hilarious moments, the story doesn't satisfy. The DVD includes a behind-the-scenes featurette and a documentary.

In this drama, Michael Shannon plays Curtis LaForche, a small-town man who manages a happy family life, despite his financial struggles and daughter's disability. When Curtis starts having terrifying dreams about a storm of apocalyptic proportions, he has difficulty communicating his anxiety to his wife or community. Despite the fact that Take Shelter didn't receive an Oscar nomination, it received five Film Independent Spirit Award nominations, including one for Shannon's performance. The DVD extras include deleted scenes, a commentary track, and a Q&A with Shannon and costar Shea Whigham.