Chris Hemsworth may be best known for Thor, but seeing director Ron Howard's outrageously high-octane racing drama Rush will make you forget all about the suit of armor and giant hammer. Hemsworth stars in the true story as James Hunt, an up-and-coming British Formula 1 driver caught in a bitter rivalry with his main competitor, Austrian racer Niki Lauda (Daniel Brühl). The two couldn't be more opposite; Hunt is a charismatic ladies' man more famous for his parties than his skills behind the wheel, while the seriously buttoned-up Lauda is constantly in a single-minded pursuit of the next title. Hemsworth is magnetic as playboy Hunt, but it's Brühl who stuns, creating a such an intense character that it's impossible to look away from the screen. 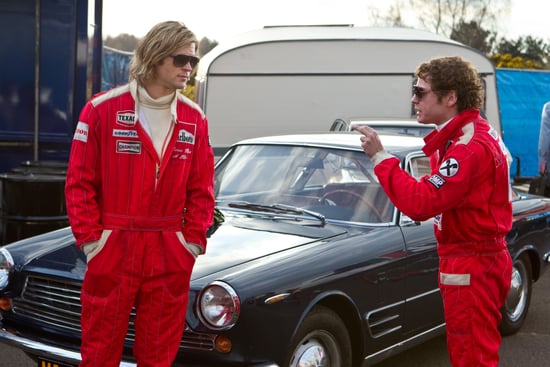 Though the film begins with Hunt (and his bare butt), the narrative is just as much about his rival, Lauda. As the working-class Hunt swerves between the track and various women, the wealthy Lauda discreetly buys his way into the races, trading his valuable knowledge of engines for higher ranks on the teams. The way the competitors are juxtaposed at times borders on too obvious. Hunt is a party animal, Lauda goes to sleep early. Hunt marries a haughty socialite (Olivia Wilde), Lauda settles down quietly. Hunt doesn't prep, Lauda studies the racetracks. They're the odd couple, but Howard's acute focus on the evolution of their relationship is perfection. Get more of the scoop on Rush when you read more.

Brühl isn't yet a household name, but he might be in time; there's a fire behind his eyes that burns even after Lauda's near-fatal 1976 crash. It would be easy to make a one-sided villain out of the no-nonsense driver, but Brühl provides such depth, especially when it comes to his relationship with his wife (Alexandra Maria Lara). By the end, it's Lauda, not Hunt, who endears himself with his surprising vulnerability.

Feelings are all well and good, but what about the cars? Rush thrills with tense race scenes, but one of the things I appreciate most about the film is that it doesn't waste time on unimportant races. Howard skips through matches that don't contribute much to the story, ultimately heightening the tension in those all-important races — which always seem to be in the pouring rain. It really doesn't matter if you're a Formula 1 fan or not, Rush is worth racing to the theater to see.