"The closer you are to death, the more alive you feel," proclaims Chris Hemsworth in the trailer for Rush. He stars as James Hunt, the dashing English racer who ruled the high-speed European track in the 1970s. Ron Howard is behind the camera depicting Hunt's rivalry with Niki Lauda (Daniel Brühl), the Austrian driver whose run in the 1976 German Grand Prix resulted in a coma, while Hunt took the gold home. The story doesn't end there — Lauda recovers, his crash only sparking the competition between Hunt and himself. Olivia Wilde also stars as Hunt's wife. 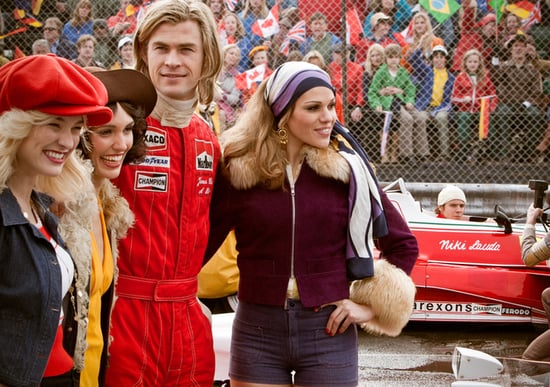 Am I the only one with goosebumps? Howard is a reliably good director, and it appears he's giving the delicate story a tender and honest tone. I'm also impressed with Hemsworth, who we mostly know as Thor, and it's refreshing to see him out of the armor. The movie opens Sept. 20, and until then, watch the trailer after the jump.

Nostalgia
Overboard Is One of My Favorite Movies, but Dean Should Have Gone to Jail For a Very Long Time
by Caitlin Gallagher 20 hours ago

TV
Important Question: When Will HBO Max Become Available on Roku?
by Amanda Prahl 22 hours ago

Netflix
How Much of Netflix's Mank Is a True Story? Here's the Deal
by Stacey Nguyen 22 hours ago

HBO
Warner Bros. Is Releasing All Its Movies on HBO Max in 2021 — Here's the Complete List
by Amanda Prahl 23 hours ago