Oz the Great and Powerful opens in theaters this week, but I got to visit the film's set during production way back in 2011. Between takes on the set, we sat down with director Sam Raimi to discuss adapting author L. Frank Baum's work for the big screen, and setting the prequel apart from the original Wizard of Oz. Here's what Raimi had to say: 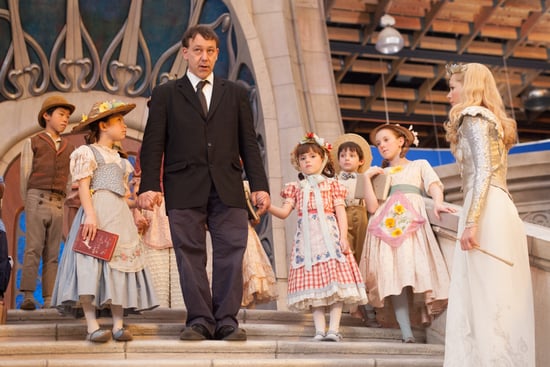 How do you stay true to L. Frank Baum's work but also give the film's story a modern feel?
Sam Raimi: First of all, I so loved the movie The Wizard of Oz that I was afraid to read versions of it that were not exactly what I loved so much about the movie. This is very strange; I didn’t want the book to mess up the movie for me. But then, after I read the screenplay, which I loved, I started to read the books and appreciate Baum's work. I was so surprised at how exactly [the movie] The Wizard of Oz was his first book. His work is fresh right now. It's brilliant and affecting and the characters don't need to be refreshed by anybody. However, the screenplay is based on a lot of elements of a lot of his books. In many of his books he would go back and talk about the wizard. There’s a little bit about the wizard in the first one, a little bit about the wizard in three and four. He went back and said, "Here’s how the wizard got here and this was his backstory." So what the writer, Mitchell Kapner, did was he took all those elements that were given to the audience in later books that he's put them back in chronological order of what happened to the wizard, how the wizard got there to the Land of Oz. . . . What might have the Wicked Witch or these other characters have been doing during this time? Sometimes it was written about, sometimes it wasn't. So, I think Mitchell Kapner could best speak about it, but he’s taken elements of the books and rearranged them in what could have happened. It’s a "what if" story.

How have your feelings about the original movie affected this project?
SR: Yeah, it's the movie that I love. That's what I fell in love with and what terrified me and exhilarated me. I didn't want to have anything to do with a screenplay having anything to do with that movie because I didn't want to mess with it or tread upon its fine nature or use it in any way. But I read the script and it was a love poem to that movie, or those books, that I didn't know at the time. I felt that it was someone who so admired the movie and they were trying to enhance it and, for me, it never took away. And, I also thought, nothing could ever take away from that movie. It's so brilliant and enduring. I wanted to honor the movie.

We don’t have many American fairy tales. So how do you keep a fairy tale distinctly American? What do you make it about to make it resonate with an American audience?
SR: I have read that people consider Baum’s The Wizard of Oz, his first book, America's first myth or America's first fairy tale. But I think it's uniquely American because there's a little bit of greed involved in it. It's also the story of an entrepreneur, a guy who, with his ingenuity and can-do attitude, drives off those wicked witches and saves the day. It's also the story of people rising up for freedom, and I think that’s an American story of the American Revolution. Farmers and, in this case, Quadlings and Munchkins and Tinkers, rising up to drive off the tyrants or the despots or whatever you want to call the Wicked Witches. So those elements are American, but I think it's not primarily American. I think it's universal, the story of all of us who are capable of doing good and the hero being made because he recognizes that ability within himself and he grows to do something greater than himself. He grows to take part in a cause that's more important than his selfishness or his greed. He learns the true value of the gifts that he’s been given as a magician. They can be used, not just to entertain others and for his own profit, but to uplift others, to set them free and to, in this case, drive off the most dreaded villains of all, the Wicked Witches. I think it’s a more universal type of story than just an American story.

Netflix
After We Collided: If History Repeats Itself, This Is When the Movie Could Hit Netflix
by Monica Sisavat 1 hour ago

Movies
Who Plays Borat's Daughter, Tutar? We Finally Have an Answer
by Amanda Prahl 3 hours ago

Selena Gomez
Selena Gomez Reveals She Voted For the First Time This Year: "Your Voice Matters"
by Monica Sisavat 3 hours ago

Sarah Jessica Parker
The Hocus Pocus Cast Reunited to Put a Spell on You Ahead of Election Day: "Make Them Vote!"
by Chanel Vargas 4 hours ago