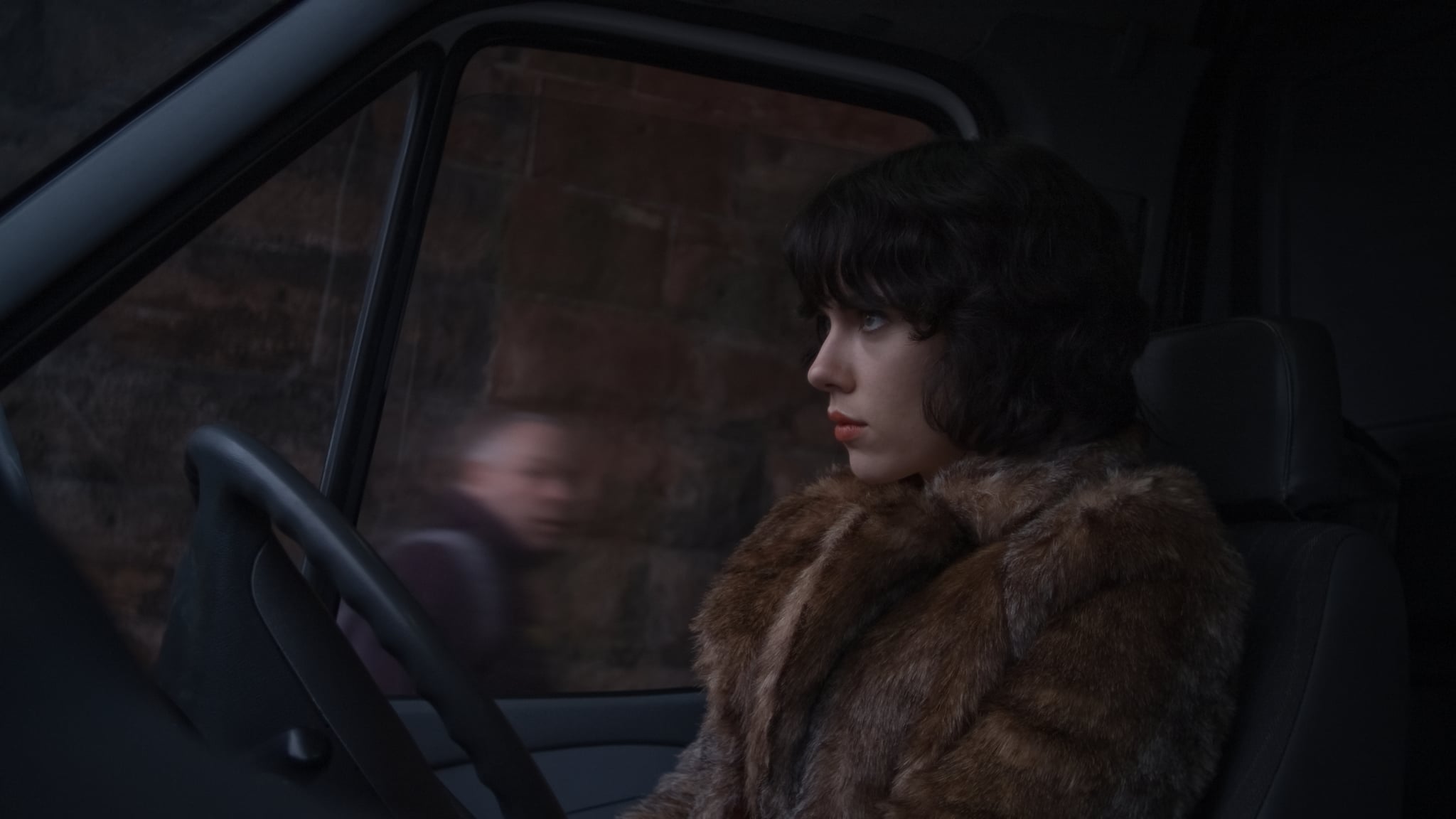 Scarlett Johansson's latest film Under the Skin is her most revealing yet — and not just because of her first fully nude scenes. In the adaptation of the novel of the same name, Johansson plays an alien in a synthetic human body who seduces and captures male hitchhikers to harvest them for their humanity. Instead of gratuitous sex scenes, though, we see her character Laura examining her naked form in mirrors, teasing men before taking what she wants from them and leaving them to die, or simply getting dressed. When POPSUGAR asked the actress why she chose this movie at this point in her career for her first onscreen nudity at a NYC press conference, she explained that it was all about balancing the storytelling:

"I think in some ways you have to sort of look at the nudity, and you assume it's going to be like a screenshot for someone, so you kind of have to weigh the value of the risk that you're taking. Is this gratuitous? Is this a vanity project? Or is this an important part of this character's journey to self-discovery — what's the gain? Of course, for Jonathan [Glazer, the writer and director], the last thing he wanted to do was take the audience out of the story and have this nudie alien shot or whatever. It was not his intention at all, and certainly going into it, we talked about it, and he was, like, 'I do not want that. So if that's at all apparent or if the value as a means of storytelling is overshadowed by the freak factor of it, for lack of a better term, then I'm not going to put it in.' So just knowing that the door was always kind of open, that it would be there if it was right, made me much more comfortable."

Johansson went on to tell reporters about the challenge of feeling self-conscious during these scenes and how she had to let it go, along with any human emotions, to play the alien on her road to self-discovery.

"I'm not a provocative person. It's not like I live to be photographed in the buff or anything like that. Of course, it really made me aware when I was doing it about all the kind of judgements and all of these things that we place on ourselves. Like how self-conscious you can be about the way you look and your own vanity, because I had to be liberated of that, and it was really challenging, but it was interesting. Like, 'Wow, I really am self-conscious about this,' or 'I'm holding onto this idea that I should look like that,' or whatever it is. We all have it. I guess as a woman, we even have it more."

In the movie, Laura spends most of her time picking up unsuspecting men. Surprisingly, not many of her "costars" in the film were actors — lots of hidden cameras were used — so Johansson had to put on real charm to get them into her van. Through 10-hour days of shooting, she learned plenty of interesting stories while seducing strangers.

"People just love to make an impact or just share their story, and I found that to be so true. Because I was trying to not share anything about myself, just sort of remain neutral . . . It's amazing when you take that neutral stance what people will offer to you. I mean, all kinds of information. Even if I didn't pick up some of these people on the side of the road, I knew who they were married to, what kind of relationship they were in, where they came from work, where they were going, what they were doing that weekend, how many kids they had, what they hated about their job, I mean, all kinds of things. I was asking where the freeway was. It's kind of amazing that if you take a backseat how much people will offer up. I think there's a real beauty in that."

While her short, dark hair helped her hide her identity while filming in Scotland, she did admit that she had one scary run-in during which she thought she had blown her cover.

"I really never had any trouble being recognized. One time, I was picking up, or I was trying to pick up this guy, who didn't actually get into my van, but he did kind of chat me up for a while, and I was trying to figure out, who is this person and does anybody love him? Will they miss you? And kind of halfway through the conversation, he looked at me and was, like, 'Are you an actor?' And my blood ran cold: I was terrified and I said, 'No, why do you ask me that?" And he said, 'Because you're f*cking gorgeous!' And I was, like, 'Oh, man. All right, I can do this. It's going to work.' And I think Jonathan couldn't use it because it was too good. He left, and Jonathan was, like, 'That was incredible.'

Under the Skin opens in select theaters on April 4.

Scarlett JohanssonMoviesCelebrity Interviews
Around The Web

Rachel McAdams
Your Favorite Judy Blume Book Is Becoming a Movie, and You'll Definitely Approve of the Cast
by Amanda Prahl 21 hours ago