Based on a true story, The Sessions stars John Hawkes as Mark O'Brien, a journalist whose lifelong polio affliction has left him paralyzed from the neck down. When Mark gets an assignment to write about the sexuality of the disabled, he panics a little, because he doesn't quite feel equipped: Mark is a virgin. In the name of research and, later, a newfound personal goal, Mark sets out to lose his virginity with the help of a sex surrogate, Cheryl Cohen Greene (Helen Hunt). While the premise may sound like an awkward mix of the raunchy and the emotionally manipulative, The Sessions avoids both. Yes, there is sex and there is poignancy, but at its core, The Sessions is a tender comedy with laugh-out-loud moments. 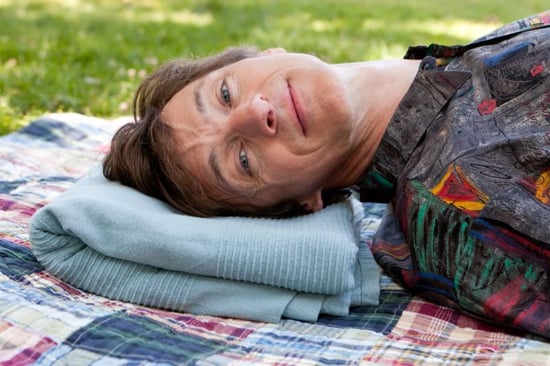 Though Mark O'Brien and Cheryl Cohen Greene are real people, The Sessions isn't a biopic acquainting you with Mark's entire life. Filmmaker Ben Lewin chose to focus on one specific time period and important experience in Mark's life (based on Mark's article "On Seeing a Sex Surrogate"). You don't need breadth to really feel like you've gotten to know Mark; all you need are the eloquent words of the dialogue and the excellent actors who deliver them. To find out what else I thought of The Sessions, just keep reading.

The backbone of The Sessions is Hawkes's performance. Indeed, after seeing him establish himself as sinister characters in other films, it's almost jarring to see Hawkes play someone so vulnerable and warm-hearted. But it takes no time to accept the actor as a severely disabled man, as Hawkes gives a 100 percent committed performance. It starts with the physical: Hawkes is lying down the entire time, never uses his appendages, and he uses a mouth stick for everyday tasks like dialing a phone as if he'd been doing it his whole life. It's impressive, but it's in the shadow of Hawkes's emotional performance. Though he incites a great deal of empathy, you never feel sorry for Mark. He's smart, he makes hilarious jokes, and he's believable as a man who can make women fall for him. Mark's disability recedes to the background, and the film simply becomes a story of a relationship between two people.

Hunt is also incredible as Cheryl, a sex surrogate who informs the audience — just as she does Mark — that she's not a prostitute. Her job is interesting and confusing, which makes it all the more enthralling to watch as Mark and Cheryl keep meeting and getting closer. Though Cheryl is very black-and-white in defining what her role is, their relationship enters a gray area as their interactions give way to real intimacy. It's more than sex, and both characters battle to figure out what that means. As a viewer, you're pulled into their same muddy thought process, and it feels bewildering and wonderful.

The overwhelming impression The Sessions gives is positivity. There's the sex positivity from Cheryl, of course, teaching Mark how healthy sexuality is, but there's also a generally uplifting feeling. The love and friendship present throughout — from Mark's various friendships to his feelings for Cheryl — fill you with unabashed joy.