Giving the people more of what they want is usually the principle behind sequels, and it definitely holds true for Guy Ritchie's Sherlock Holmes: A Game of Shadows, but a good sequel takes what works and makes it better. Though this follow-up to the 2009 hit retains the chemistry of Robert Downey Jr. and Jude Law as Sherlock Holmes and Dr. Watson, it disappoints by failing to add anything to the franchise. This time, Holmes is as intelligent, stubborn, and incorrigible as ever, but Watson is trying to evolve by getting married. Unfortunately, Watson's marital status is just about the only development for either of the main characters. 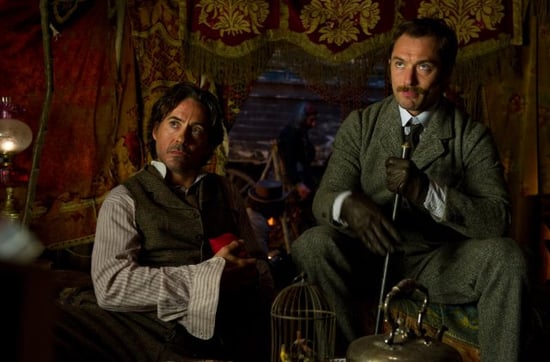 This time, we follow Holmes and Watson as they trace a series of crimes to Holmes's infamous nemesis Professor Moriarty (Jared Harris), who has been leaving clues around Europe that he's laying the groundwork for war. Holmes is hot on his trail, while a batch of assassins are hot on Holmes and Watson's trail, leading to a game of cat and mouse that could be fun to watch, if the story was told in an engaging way. Unfortunately, plot points are withheld until the last moment, and the twists are so convoluted that you're lost along the way. It's a shame, because the film could have been a satisfying sequel, but instead it feels like a half-baked shadow of its predecessor. To find out what I mean, just keep reading.

The opportunity to get wrapped up in an interesting mystery is lost in A Game of Shadows, because it's really just Holmes's game to play. It's nice to learn his thought process after he has unraveled everything, but it would be better if we were also given enough information to follow along. Instead, we're spoon-fed Holmes's revelations, and not until after the scene is over, which takes away the thrill.

The action scenes are the one area that Ritchie improves upon. Ritchie's modernized version of Holmes is an expert fighter and the visual rendering of Holmes's working out his brilliant plan of attack before he even takes his first swing are undeniably cool. Those scenes are rivaled only by the awe-inspiring special effects of the action sequences. Ritchie manages to make explosions and deadly chases not only exciting but creative and sophisticated.

Seeing new faces lends a dash of novelty, but none of the new characters are fleshed out enough for you to feel invested. Noomi Rapace's gypsy character, Madam Simza, doesn't feel like a necessary member of the team (especially since she isn't a love interest for anyone), and though I enjoyed Mad Men's Harris as Moriarty, he fails to prove to the audience that he's the menacing criminal mastermind of literary legend. There is one cast addition who delights: Stephen Fry, who plays Holmes's oddball brother. He adds a dash of comic relief, but I would have loved to see more of him.

For their parts, Downey and Law have no trouble repeating the easy chemistry they had in the first movie. They're a perfectly matched comedy team, and just as believable when they're sniping at each other. But it's not enough to keep the film afloat; the plot's flimsiness detracts from the strength of the lead characters, and the bloated running time does even more to test your patience. This is Sherlock Holmes; we know he's going to win, so we might as well be snappily entertained while he does it.

Nostalgia
Welcome to 2020, Mr. Banks! The Father of the Bride Cast Reunited For a Surprise Zoom Wedding
by Perri Konecky 10 hours ago

Netflix
The Trial of the Chicago 7: See How the Movie's Cast Compares to the Real People
by Amanda Prahl 13 hours ago

Halloween
In Case You Were Curious, Here's What the Halloweentown Cast Has Been Up to Since 1998
by Monica Sisavat 14 hours ago