Do you miss movie trailer voice-over guy? Good news, he's back in full form in the cheesetastic trailer for Miley Cyrus's So Undercover. Cyrus plays fast-talking Molly Morris, a young private investigator recruited by an FBI agent (Jeremy Piven) to keep an eye on a college student. Molly undergoes a Miss Congeniality-style makeover and gets transformed into a beauty worthy of the Greek system. Once undercover, she meets cute college student Nicholas (Revenge's Joshua Bowman) and has a series of comical misunderstandings while protecting her mark. 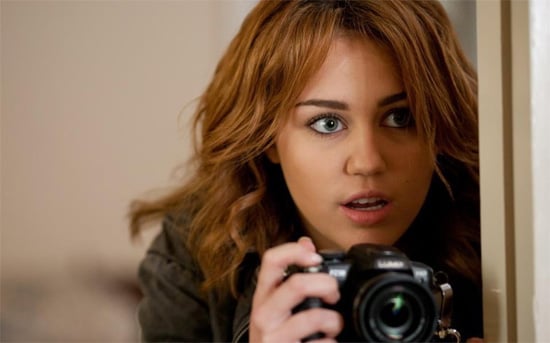 After a number of years at the helm of her own Disney show, Cyrus has got some pretty consistent comic timing, but even her bubbly quips can't really save this trailer. If I were 14, I would be so running to the theater to watch Cyrus kick some ass at a frat party, but I'm not. The movie doesn't have a US release date yet, but you can watch the trailer after the jump.

Halloween
Lydia, Is That You? This Beetlejuice-Inspired Wedding Is Straight From the Afterlife
by Haley Lyndes 7 hours ago