Jake Gyllenhaal may be about to steam up the screen with Anne Hathaway in Love and Other Drugs, but come Spring, he'll be putting his clothes back on — and jumping from identity to identity for Source Code. In the futuristic thriller, Gyllenhaal plays an officer who is transported into the body of another man via a very fancy computer's source code. 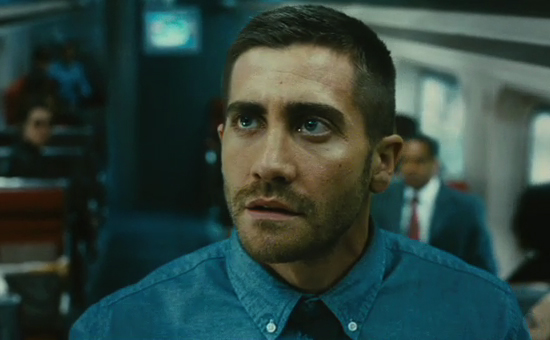 His mission is to prevent the train he's been put on from blowing up, while assuming the identity of a commuter. The catch is that he only has eight minutes to figure out who the bomber is, thereby saving the train full of passengers and thwarting future terrorist attacks. Luckily, if he fails, he has the chance to start all over again (kind of like Groundhog Day meets Quantum Leap). There's a love angle too, as Gyllenhaal's character begins to feel an urgency to save a woman on the train (Michelle Monaghan). I'm a big fan of Gyllenhaal, but I feel like we've seen iterations of this story over and over again. The movie comes out April 15, 2011, but watch the trailer now when you just read more.