We've wanted to see a trailer for Spring Breakers ever since we saw pictures of Selena Gomez and Vanessa Hudgens filming in teeny bikinis and James Franco looking like an early-2000s Kevin Federline. Now the trailer is here, and it's way darker than anything former Disney starlets Gomez and Hudgens have done before. They're joined by Ashley Benson and Rachel Korine as four friends who want to go on Spring break so bad they're willing to rob a liquor store for the funds. They're apprehended not long after they have their first taste of debauchery-soaked fun, and soon Alien (Franco) becomes their knight in shining cornrows, assisting the girls in making even more trouble. 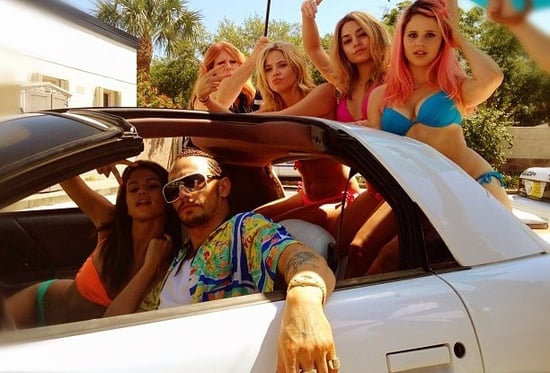 With all the guns, sexiness (seriously, the girls almost exclusively rock their bikinis), and depravity, Spring Breakers seems to be going for shock value — and I'm pretty confident it's going to achieve that feat. Oh, and if you already think James Franco is kind of a weird dude, this preview will do nothing to change your mind. Spring Breakers comes out — appropriately — on March 22, so watch the clip now and let us know what you think after the jump.

Jamie Lee Curtis
Lock Your Doors! Michael Myers Is Back in the Suspenseful Trailer For Halloween Kills
by Chanel Vargas 18 hours ago

Celebrity Instagrams
Timothée Chalamet Chats With Selena Gomez as He Waits in Line to Vote Early: "Proud of You"
by Brea Cubit 5 days ago

Movie Trailers
The Prom's Star-Studded Teaser Is So Fun and Extra, It Feels Like a Promposal
by Grayson Gilcrease 6 days ago

Awkwafina
See the New Teaser For Disney's First Movie of 2021, Raya and the Last Dragon
by Alessia Santoro 5 days ago