Zachary Quinto, Chris Pine, and Zoe Saldana are outgunned and outnumbered in the full trailer for Star Trek Into Darkness. Benedict Cumberbatch plays the new baddie, and this trailer gives a lot more details about his mysterious character than the last teaser. He's a former top agent out for vengeance after his commanders commit a crime he apparently cannot forgive. Thus, he takes out his anger by attacking London, then assures our old Star Fleet friends that none of them is safe. The new trailer also gives us a lot more footage of Cumberbatch's well-laid plans and the action that follows. 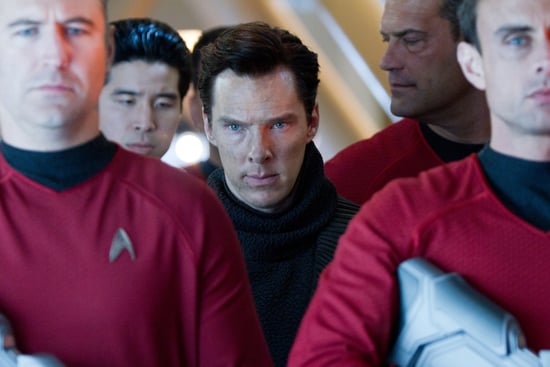 Star Trek Into Darkness, with its murderous villain, looks like it has a more serious undertone than its 2009 predecessor. I can't wait to see Cumberbatch go into full-on bad-guy mode — while some are used to seeing him as the snarky Sherlock Holmes in Sherlock, he seems to have the evil thing down pat. The movie is due in theaters May 17, and you can watch the new trailer after the jump.

Movie Trailers
The Prom's Star-Studded Teaser Is So Fun and Extra, It Feels Like a Promposal
by Grayson Gilcrease 1 week ago

Awkwafina
See the New Teaser For Disney's First Movie of 2021, Raya and the Last Dragon
by Alessia Santoro 6 days ago

Harry Shum Jr.
Harry Shum Jr. and Jessica Rothe's New Film, All My Life, Is Based on an Emotional True Story
by Kelsie Gibson 1 week ago

Netflix
Netflix's The Boys in the Band Gives Fans a Hopeful, If Open-Ended, Conclusion
by Mekishana Pierre 3 weeks ago