Star Trek Into Darkness is J.J. Abrams's second installment of the famous franchise he rebooted in 2009, and the success of the first film is both a blessing and a curse for the sequel. It has a lot to live up to, but this isn't Abrams's first time at the sci-fi rodeo; he delivers a fantastic film that's both a satisfying sequel and a standalone movie (no need to rewatch the first one or even really be familiar with the Star Trek universe). The awe-inspiring visuals are enough to make a fun Summer movie, but when you factor in the engaging story and strong performances of the cast, Star Trek Into Darkness adds up to a can't-miss movie. 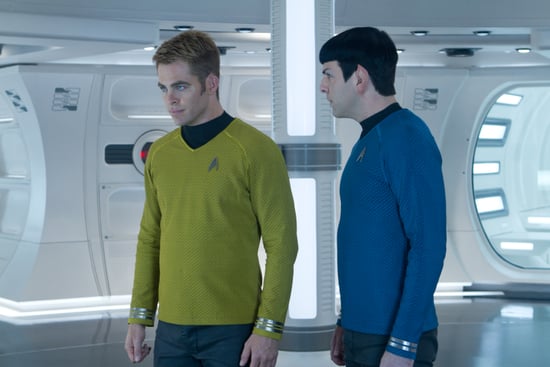 Chris Pine and Zachary Quinto are back as Captain Kirk and Spock, along with the rest of the Starship Enterprise, like Uhura (Zoe Saldana), Scotty (Simon Pegg), and Sulu (John Cho), all showing off more of their fun chemistry, but with interesting developments. Scotty has a moral dilemma with Kirk, Spock and Uhura are having relationship issues, and Kirk and Spock are working on their friendship. It would be entertaining to watch another chapter of these characters together, but it's the arrival of Benedict Cumberbatch as the mysterious villain who targets Starfleet that escalates the excitement. Ready to find out why Star Trek Into Darkness is so great? Just keep reading.

While many recent villains in the action-movie genre have been disposable bad guys, Cumberbatch's character is essential to the movie's success. His role — whose identity I won't spoil, because that's no fun — moves the plot forward and is the catalyst for the relationship development of some of the characters. He's extremely intelligent and even sympathetic sometimes, but once you see how ruthless and violent he is (my jaw dropped at a particularly shocking scene), he becomes one of the most menacing onscreen villains of the last few years. Cumberbatch's performance is brilliant, effortlessly switching from calm to intense, while his voice alone shoots shivers down your spine.

Amid all the onscreen terrorism, explosions, and gravity-defying fights, Star Trek Into Darkness still has time for emotion. The friendship between Kirk and Spock gets a spotlight, but not in a cheesy "bromance" way. We're not just told that they don't get along; we see their very obvious personality clashes. Like in the first movie, Spock is half-Vulcan and overly logical, while Kirk is hot-blooded and impulsive. It's easy to understand them both — and be touched when they make breakthroughs in their friendship.

Altogether, Abrams proves he's the current master of sci-fi, and not just because he knows how to make cool-looking monsters or chooses the right special effects. The heart, action, and storytelling make Star Trek Into Darkness a great movie — and one of Abrams's best projects so far.

Jamie Lee Curtis
Lock Your Doors! Michael Myers Is Back in the Suspenseful Trailer For Halloween Kills
by Chanel Vargas 2 hours ago

Janel Parrish
Janel Parrish's Hallmark Film, Holly & Ivy, Will Give You All the Feels: "It Has So Much Heart"
by Kelsie Gibson 5 hours ago