The Star Trek Into Darkness poster that we saw the other day hinted that villain Benedict Cumberbatch was going to have a taste for destruction, and this brand-new footage confirms just how nasty he's going to be. In this teaser, we finally get a look at the Star Trek sequel and what Captain Kirk (Chris Pine) and Spock (Zachary Quinto) will be up to, and by the looks of things, it's running from Cumberbatch's character. He's the only person who has any dialogue in this peek, and as he preaches about vengeance and the world not being safe, we see the characters we got to know in the first film, including Uhura (Zoe Saldana), and Sulu (John Cho), along with new faces like Alice Eve. 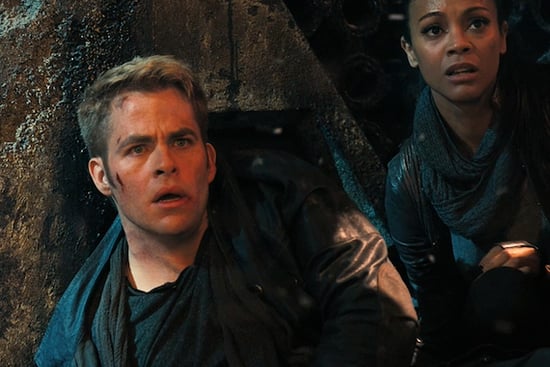 It's fun to be reunited with the familiar characters, but everyone's in such mortal danger that I'm hoping that there's some fun to this sequel. I can't complain too much — this does look pretty exciting, and I'm curious to get a better look at the insane creature director J.J. Abrams has come up with this time. Star Trek Into Darkness comes out May 17, and you can watch the teaser after the jump.

Movies
Travis Scott Has a New Album and Movie on the Way, and We Are So Ready
by Kelsie Gibson 8 hours ago