Happy Labor Day, everyone! With any luck, you're enjoying a nice, relaxing day off rather than hanging out in your office today. Speaking of which, on Friday I asked you to test your knowledge of movie workplaces, and today, I'm quizzing you about work life on the small screen. Do you know your TV offices? Take this quiz and find out! 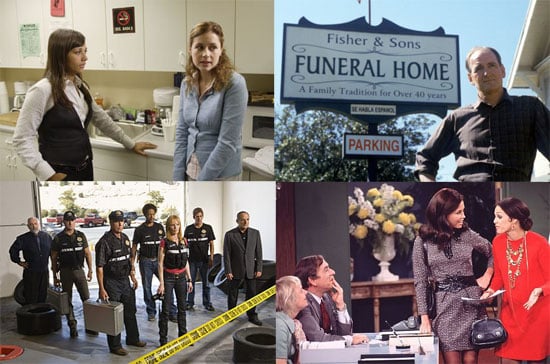 Do You Know Your TV Workplaces?

On The Office, what branch did Karen Filippelli initially work for?

In The Mary Tyler Moore Show, what was Mary Richards's job?

In the early seasons of Six Feet Under, Fisher & Sons competed with another funeral home. What was its name?

Murphy Brown was legendary for going through secretaries quickly. In the final season, which celebrity did NOT play a secretary?

What was the fictitious magazine where the Suddenly Susan characters worked?

On Ally McBeal, where was the law firm of Cage, Fish, and Associates located?

TV's CSI has spinoffs set in New York and Miami, but where is the original CSI set?

On Parks and Recreation, what is Ron Swanson's job?

What is the name of the boss on Workaholics?

Netflix
Wondering About the Main Characters of Future Bridgerton Seasons? Here's What to Know
by Amanda Prahl 3 hours ago

Netflix
Dearest Reader, Bridgerton Has Been Renewed For Seasons 3 and 4
by Kelsie Gibson 7 hours ago