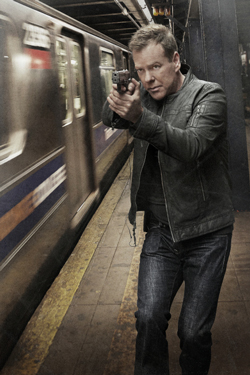 I guess Jack Bauer isn't retiring any time soon: 24 is about to be made into a full-length feature film starring Kiefer Sutherland. The show's two-hour TV movie in 2008, "Redemption," was both successful and satisfying — and a good indication that the big screen version of 24 could be awesome as well.

The Simpsons and The X-Files were made into films while their TV counterparts were still on the air, but it's not known if the production on the 24 movie will start before or after the series ends.

Old TV series have long been mined for movie material; right now, The A-Team and Gunsmoke are headed to the movies, but what current TV shows would you want to see jump from the small to big screen? Lost is an obvious one, while Mad Men has the kind of production value that could translate into a film. What TV shows would you like to see turned into a movie?

PBS
It's a Sad Day in Elwood City: Arthur Is Coming to an End After More Than 2 Decades
by Kelsey Garcia 1 hour ago

Shirtless
After Seeing These Pictures of Resort to Love's Sinqua Walls, We're Going to Need a Minute
by Grayson Gilcrease 3 hours ago

Entertainment News
Little Mix Have Officially Arrived . . . in London's Iconic Madame Tussauds, That Is
by Navi Ahluwalia 4 hours ago

Margot Robbie
A Hose, a Kiddie Pool, and Other Products The Suicide Squad's Makeup Team Used on Set
by Danielle Jackson 23 hours ago