Well, Survivor fans, tonight's the night! The 20th season we've all been waiting for has finally arrived. Some of the show's most notorious baddies will head to Samoa to square off against series favorites for the ultimate battle between good and evil. Personally, I can't wait to see a season that's jam-packed with huge personalities, and it's always more fun to jump right into new episodes when we don't have to waste time getting to know the cast. 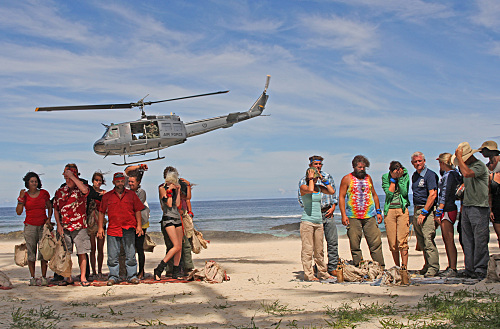 That said, if you need a refresher on who's on the roster, I've got you covered — get to know the group here. So who will you be rooting for? I'm torn, since I loved Colby, Rupert, and Tom the fireman, but we all know the conspirators make for the best fodder. There's also the added mystery about whether or not the castaways will change their stripes midway through, and I'm ready for a season of scandal, cat fights, and game-changers. Will you tune in?

Get a sneak peek at tonight's premiere when you read more.

Nostalgia
From Usher to Ray J, These Are All the Stars Who Appeared on Moesha Over the Years
by Camila Barbeito 15 hours ago

Anthony Mackie
Anthony Mackie Does His Best to Shut Down Captain America Rumors, but We're Not Fooled
by Grayson Gilcrease 17 hours ago