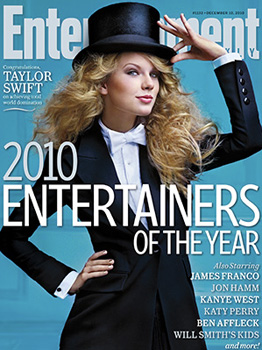 We've been counting down the memorable highs and lows from 2010, but there is one person in particular who had a very good year: Taylor Swift. Time magazine named her one of their most influential people back in April, and now Entertainment Weekly has crowned her Entertainer of the Year.

Swift is the youngest performer ever to receive the recognition from the magazine, and she worked hard for the title. To recap, the singer took home four Grammys earlier this year, made a big Hollywood movie, and most recently, picked up an American Music Award. Oh, and somehow in all of that commotion, she created another album, Speak Now, which has already taken off like gangbusters and broken records for first-week sales.

Obviously Swift has been a busy lady, but it could be argued that 2009 was a bigger year for her, since that's when she really blew up on the music scene and became a household name. As for 2010, there were just so many artists who left their mark (Katy Perry, Justin Bieber, or Eminem immediately come to mind). Did Swift really best all of them?