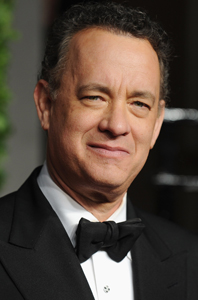 Tom Hanks is getting cast away again — but this time, by pirates. The Hollywood star has signed on to play Captain Richard Phillips, the real-life cargo ship leader and hero who offered himself up as a hostage to Somali pirates to protect his crew in 2009. After three days, he was saved by Navy SEALs and went on to write a book about the frightening ordeal titled A Captain's Story: Somali Pirates, Navy SEALs, and Dangerous Days at Sea. The film will be based on Phillips's story, but no word yet on who will costar as the pirates or Phillips's crew.

Netflix
The Trial of the Chicago 7: See How the Movie's Cast Compares to the Real People
by Amanda Prahl 12 hours ago