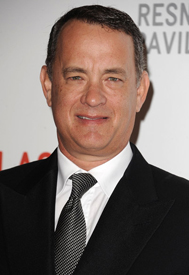 Tom Hanks is taking on one of the most critically acclaimed novels of the past 10 years: the actor has signed on to star in Cloud Atlas. The film is an adaptation of the David Mitchell book, which follows six nested stories ranging from the distant past to the postapocalyptic future. Each tale is abruptly cut off, and the following one starts with a reference to the one prior.

For example, the book begins in the 19th century South Pacific and is written from the perspective of a captain's log, and the second segment starts when a character finds the log, and so on. When it gets to the central piece, the sections start going backward to finish up each story. There's no confirmation on which character Hanks will play yet, though he's rumored for Dr. Henry Goose, which is part of the opening segment.

If that book description sounds unusual, the directing news is just as interesting. Three people are set to share directing and screenwriting duties: Andy and Lana Wachowski (of the Matrix films) are collaborating with Tom Tykwer, best known for Run Lola Run.