What would Robin Hood do if he hit Wall Street? Tower Heist gives us an inkling with Josh Kovacs (Ben Stiller), the general manager of a luxury New York apartment complex. Josh rounds up the building's not-quite-merry employees to rob penthouse resident Arthur Shaw, after discovering the mogul has squandered the staff's savings in a Ponzi scheme. The ragtag group offers plenty of laughs along the way with their criminal inexperience, but their bumbling antics can't cover-up a heist that is too far-fetched to be true. 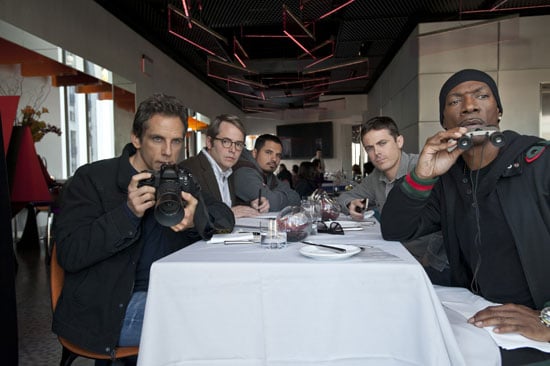 Part of the reason the humor fails to distract from the improbable caper is due to the fact that it's spread thin among the film's all-star cast, which also includes Eddie Murphy, Matthew Broderick, Tea Leoni, and Casey Affleck. The ensemble is so large that the film is forced to parcel out the humor among too many characters, robbing anyone of the chance to really stand out. Everyone receives an equal share of one-liners, but I felt certain characters could have developed jokes into side-splitting humor had they only received more screen time. To find out why I expected Tower Heist to pull off more than just a heist, just keep reading.

In need of expert advice, Josh turns to petty criminal Slide (Eddie Murphy) to help his team pull off their crime. After years of starring in family friendly films, it's refreshing to Murphy unleash his old school brand of humor, with a character who isn't afraid to curse and isn't an animated animal. Everything from Murphy's delivery to his facial expressions are spot on, but he's grossly underutilized, as Slide isn't even introduced until the middle of the film. 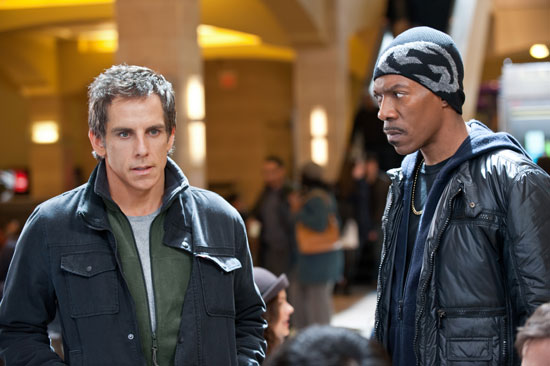 It's clear that Josh isn't running an Ocean's Eleven type of operation, so the ease in which the group puts their plan into action is hard to believe. Neither building security, which has been touted as the most sophisticated in the world, nor the FBI agents stationed at the building, even pose a threat. The day of the robbery, the group successfully uses the balloons of the Macy's Thanksgiving Day Parade as a diversion, but no one seems to notice when they dangle a car outside the building's window.

Tower Heist takes on a heavy topic with lighthearted humor that keeps the film from feeling too preachy. Though the movie only scratches the surface of the cast's individual comedic chops, the jokes will keep you satisfied — if you can suspend disbelief.

Netflix
For Anyone Wondering, Enola Holmes Takes Place in the 19th Century — Here's the Exact Year
by Brea Cubit 23 minutes ago

Netflix
Enola Holmes: Nobody Explicitly Says What the Reform Bill Is, but We Can Decipher the Clues
by Brea Cubit 1 hour ago

Netflix
Enola Holmes Gets a Happy Ending, but Not Before Solving a Big Mystery
by Grayson Gilcrease 1 hour ago

Nostalgia
Test Your Legally Blonde Quotes Knowledge Now with This Quiz — What, Like It's Hard?
by Amanda Prahl 1 hour ago

Nostalgia
Upon Rewatch, Smart House Is the Scariest Disney Channel Original Movie Ever Made
by Sabienna Bowman 1 hour ago

Netflix
The Reason Behind Viscount Tewksbury's Chase in Enola Holmes Is Elementary, My Dear Reader
by Brea Cubit 2 hours ago