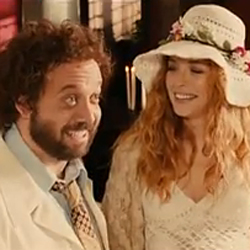 Paul Giamatti has no problem getting women in Barney's Version — just not the right one. Based on the novel by Mordecai Richler, the story centers around the thrice-married Barney Panofsky (Giamatti) and his wives (most notably Twilight's Rachelle Lefevre and a funny Minnie Driver). Dustin Hoffman plays Barney's bawdy father, while — if you watch very closely — Scott Speedman appears as one of his friends. I'm already giving the ensemble my stamp of approval, but watch the trailer when you read more.

Movie Trailers
"It's Happening": Watch the Thrilling First Trailer For Scream
by Kelsey Garcia 5 days ago

Movie Trailers
BRB, Losing It Over Timothée Chalamet's Wig in the Teaser For Netflix's Don't Look Up
by Victoria Messina 9/08