The trailer for Thor received its unveiling over the Summer at Comic-Con, but the full preview is now here for the rest of the world to ogle! The basics: Chris Hemsworth plays the beefy Thunder God Thor, who gets booted from his homeland Asgard by his father (Anthony Hopkins). After plummeting to Earth, he bumps into Jane Foster (Natalie Portman) and her friend Darcy (Kat Dennings). Foster naturally assumes he's just a hot homeless guy, but once he discovers his magical hammer, Thor becomes a fighting machine and a threat to his villainous brother Loki (Tom Hiddleston). 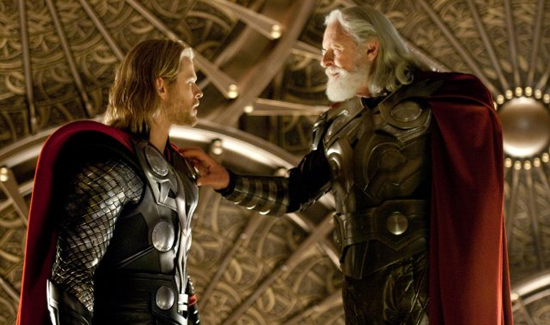 The stars of the film already shared their excitement over the project at Comic-Con, but between these scenery shots of Asgard and Hemsworth's long, flowing locks as he charges at opponents, I'm officially sold on the movie, too — well, at least the trailer. But my favorite part: Iron Man 2's Agent Coulson (Clark Gregg) makes another appearance, which proves that we're getting closer to the epic crossover that will be The Avengers movie. He even references Tony Stark! Give it a look, and share your thoughts when you read more.

Netflix
Hold on Tight, Spider Monkeys — All 5 Twilight Movies Are Coming to Netflix Next Month
by Victoria Messina 13 hours ago

Movies
The Shazam Family Is Bigger and Better Than Ever in the Sequel: Here's Everything We Know
by Grayson Gilcrease 14 hours ago

Music
Welcome to the Space Jam: Here's Your Chance to Check Out the Songs From the Sequel
by Grayson Gilcrease 15 hours ago

Disney
In Magical Casting News, Rachel Zegler Will Be Playing Snow White in the Live-Action Film
by Kelsie Gibson 18 hours ago