Clint Eastwood hasn't been in a movie since 2008's Gran Torino, and he hasn't been in a movie directed by anyone other than himself since '93. So is Eastwood in capable hands with first-time director Robert Lorenz in Trouble With the Curve? Not quite. Eastwood takes center stage as Gus, an old-school baseball scout whose career is threatened by the fact that he's going blind. Though he's far too stubborn to admit it, Gus needs his daughter, Mickey (Amy Adams), more than ever, but their relationship has been broken since the death of his wife when Mickey was just a child. When Mickey learns of her father's condition, she tags along with Gus on what could be his last scouting trip to observe high school ball players. With an excellent cast (that also includes John Goodman and Justin Timberlake), Trouble With the Curve should be a home run, but it strikes out one too many times. Here's why: 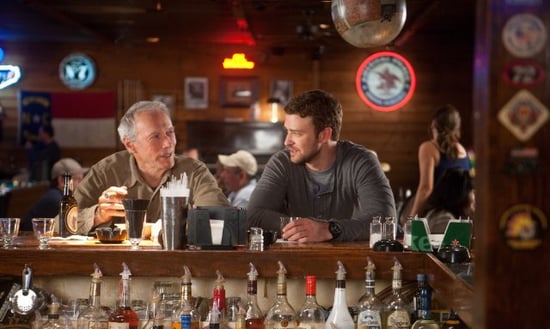 Steven Yeun
We Don't Know Much About Jordan Peele's New Horror Film, but the Poster Offers Some Clues
by Kelsie Gibson 19 hours ago

Netflix
Sexy Movies to Stream on Netflix in August, Because the Only Place You Should Be Is Indoors
by Corinne Sullivan 22 hours ago

Netflix
Good News For Gunpowder Milkshake Fans: A Sequel Is in Development
by Kaley Rohlinger 6 days ago

by Corinne Sullivan 12 minutes ago