It was a wild time inside the True Blood panel at Comic-Con tonight — I haven't seen a bigger fan response quite yet, and personally, I haven't been more excited about another event. The audience was given a sneak peek at a compilation of scenes from the last half of the current season, and I pretty much gasped throughout (yes, I know a fair amount of spoilers now. No, I won't spill them all here, so you can read on safely). 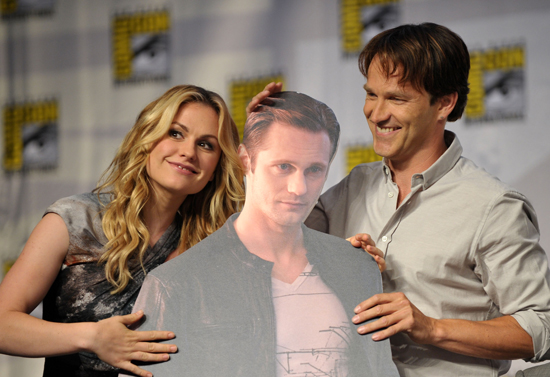 Most of the cast was represented on stage, including Anna Paquin, Stephen Moyer, Joe Manganiello, Sam Trammell, Nelsan Ellis, Deborah Ann Woll, Kristin Bauer, Denis O'Hare, and Rutina Wesley, as well as series creator Alan Ball and Charlaine Harris. The glaring omissions? Alexander Skarsgard and Ryan Kwanten, who are both filming movies right now. Moving on: so what did the sexiest cast on TV have to say?

To read some more tidbits from the True Blood panel, just read more.