It was the dead versus the undead on True Blood this week, and Antonia strikes the first blow against the vampires. Bon Temps’s residents started choosing sides in what already seems like an inevitable war. With those who love vampires standing protectively by their coffins, and those who have been hurt by them ready to join the resurrected witch. 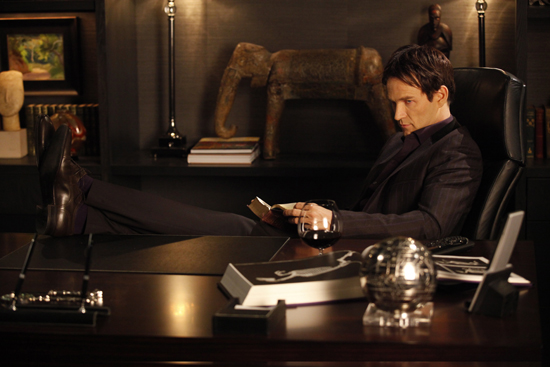 King Bill emerged as a savvy leader during this episode, though it still remains to be seen what role other characters, like Lafayette, will play in the battle. It leads up to one nail-biting cliffhanger, so let's break it down when you read more.

What do you think? Will Jason be able to save Jess before she bursts into flames — and how will Hoyt react if he does? How do you think the standoff between vampires and witches will develop? Let me know in the comments section.

Personal Essay
Cartoons Are Finally Embracing the LGBTQ+ Community, and It Means the World to Me
by Deniz Sahinturk 1 hour ago

HBO
The Vow: Barbara Bouchey and Keith Raniere Dated For Nearly a Decade Before She Fled NXIVM
by Monica Sisavat 3 hours ago

Hulu
Confused by PEN15? Here's When the Cringe-tastic Comedy Takes Place
by Camila Barbeito 4 hours ago

Netflix
Netflix's Ratched May Be a Mystery, but Its Vintage Setting Is on Full Display
by Grayson Gilcrease 4 hours ago

Holiday Entertainment
Thanks to Hallmark's Christmas Schedule, We're Officially Starting the Holidays in October
by Kelsie Gibson 5 hours ago