True Blood has been heating up over the past few weeks, and this week, things finally get exciting for Sookie — even if her first sex scene in a long time is pretty weird, even by True Blood standards. It's not all sexy time this week, though: there are two notable deaths — one of them much sadder than the other, but I think we can agree it was both their time. Jason shows off a new clever side as he tries to break the vampires out of the Governor's clutches from the inside, while Eric also gets a little further on that front. 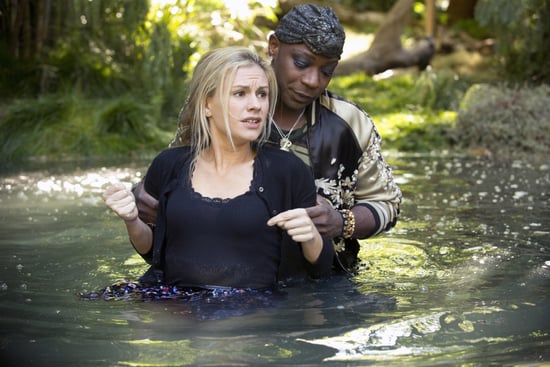 I'm ready to talk True Blood in the most expressive way — through GIFs! Let's relive this week's crazy events.

The getting-dreamier Warlow zips over to Sookie's aid and stops Lafayette/Sookie's dad from drowning her.

Check out the rest of this week's GIFs after the jump.

When Sookie Banishes the Spirit of Her Father

It's harsh, but necessary. Hopefully we won't see the spirit of Sookie's murderous dad again (or any more Lafayette possessions).

When That Werewolf Woman Is Eating Fried Chicken in the Nude

Why is this scene necessary? Also, hygiene.

When Sookie and Warlow Go to Fairyland

Oh man, fairyland again? Supposedly it's the only place they'll be safe, but nothing good ever comes of that place. Are they going to emerge years from now?

When Jason Gets Into the Governor's Good Graces

Jason's so clever this week! He talks his way into vamp camp, smartly working his way right in to save his friends.

She doesn't have a single name and then she gets four. Good luck with that.

When Arlene Has Terry's Bad Memories Glamored Out of Him

Arlene deduces that Terry might kill himself, so she decides to get the PTSD glamored right out of him. It's a great plan, except . . .

When Terry Gets Shot Anyway

When Sam Gives Emma Back to Her Grandmother

Emma goes back to her grandma when Sam realizes that it's not right that she stays with him. Please say this story line with Sam and Emma and Alcide chasing after them is done.

I'm really glad that Jessica doesn't end up being forced to have sex with a stranger for an audience, but I'm just sayin': James? Smokin' hot.

When Bill Rips the Governor's Head Off

Bill finally does something I approve of this season! It's gross, but the Governor totally had it coming.

Sookie embraces her label of "danger whore" and lets Warlow bite her, then she bites him, then she gets naked and straddles him. I get it, Warlow's pretty hot, and that accent isn't hurting anyone. You know, Sookie's had stranger sex than this.