I'm hesitant to say it (because who knows what they'll throw at us next episode), but this week's True Blood ties up a lot of loose ends. Of course, when one fire monster retreats, another supernatural force is bound to spring up in its place. The Authority is on the rise after abolishing the law that says vampires can't feed in public, leading to some chaos in Fangtasia. Sookie is getting closer to finding out who killed her parents but ends up getting held hostage by "Obamas." We get a flashback at Alcide as a young pup, and it appears he's had the same haircut for about 20 years. 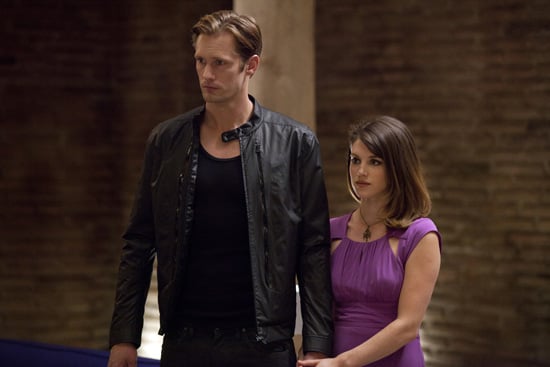 Russell and Steve Newlin appear to be the latest happy couple in Bon Temps, and Russell even bestows a canine present on his betrothed: Luna's wolfy daughter, Emma. I'm sure they won't be nearly as excited about her once she turns into a human again. Find out what else happened on this week's True Blood after the jump.