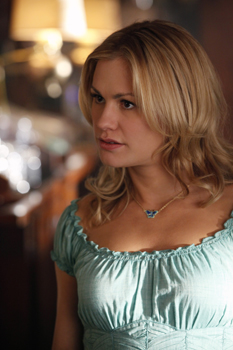 There will be no True Blood recap this week, because I can only think of one scene (AKA The Greatest True Blood scene ever) that happened in the episode and it is clouding my entire brain. Just kidding! Though there was scene that I watched several times over, plenty of other stuff (really!) goes on in this installment.

Chock full of revelations (and good feelings I might add: congrats to newly married stars Anna Paquin and Stephen Moyer on their weekend wedding!), this is possibly my favorite episode of season three thus far. Let's get to it before I spill spoilers when you read more.

I hate that there are only two episodes of season three left — it's getting so good right now! So aside from the best kiss on the show ever, what else did you think? Chime in in the comments below, and prove your fandom by joining the True Blood Southern Vampire Series in the Buzz Community for more!