Another season of True Blood has concluded, and the episode is not without its share of blood and bare butts. Season six goes out with a puddle of goo as we see what the vampires — newly immune to the sun's harmful rays — do, and whether Sookie fulfills her wedding promise to Warlow. Meanwhile, Eric heads to a remote location, but his vacation doesn't go quite as planned. I enjoyed this season finale probably more than any other episode this season, because the show finally feels like it's getting back to its roots. Let's recap, shall we? 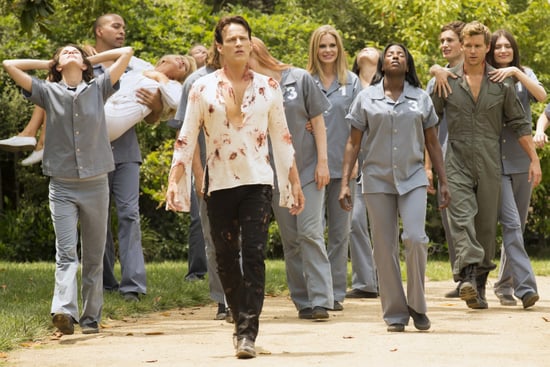 When the Vampires Start Having Sex Outside Bill's House

When Warlow Freaks Out on Sookie

Warlow is too good to be true. Sure, he was a little shifty in the beginning (he did kill Sookie's parents or whatever), but he is superhot and has a bangin' accent, and he wants to marry Sookie. All positive things, right? Not so much. That guy has a temper on him, and he's pretty much ready for Sookie to be his sex and blood slave.

At first I thought Bill is a jerk for just glamoring Takahashi and leaving him in the middle of the forest alone, but then Takahashi opens the suitcase full of cash Bill gave him. Not bad for a few days work, eh?

Get the rest of the GIFs after the jump.

When Bill Can't Come in the House to Stab Warlow

Is it wrong that I cheered a little bit when Bill realizes he can't come in the house to stab Warlow? He's used to going everywhere he wants as Billith, and even though he's trying to save Sookie, I kind of like seeing him not get his way for once.

When Sookie and Jason's Fairy Grandfather Comes Out of the Portal

That guy is still here? I forgot about Niall ages ago, but he was just waiting for his chance to pop out of the shower and save the day. It's actually nice to see him again, and not just because he helps kill Warlow.

That's a wrap for Warlow! I have to admit I, like Sookie, am always skeptical that a pile of steaming goo will turn back into a person, but I think we're done with that evil hybrid for good.

When We See Eric in Sweden, Naked, Reading a Book in the Sun

Totally naked, you guys. He can do whatever he wants now that he's immune to the sun, and he chooses to sit on the top of a snowy mountain, butt naked. Seriously, we even see his man parts.

Then When Eric Starts Burning

Nooooooooo! As a firm Eric fan, I just want to note that we didn't see him fully die, but this doesn't look good. Please, for the love of Lilith, let him pull through.

When We Flash Forward Six Months and Bill Is on TV

All of a sudden, we're six months into the future? What? And Bill is a bestselling author for writing some book called And God Bled, about himself? Whatever, True Blood.

I wish we'd seen more of what happened in those missing six months, but the most important development: Alcide got a haircut. Oh, and he and Sookie are a thing again. I kind of love it.

When We See Inside Jason and Violet's One-Sided Sex Life

When We Find Out Sam Is Now the Mayor

I actually understand the logic in this, but the suggestion just sounds nasty.

When Tara's Mom Tells Tara to Drink Her Blood

I'm just putting it out there, but who else thinks Tara's mom has Hep V? That woman is one crazy you-know-what and whenever she turns up, trouble follows.

When the Infected Vampires Creep Up on the Party

Those mortals better find some healthy vampires to defend them — and quick, because those scummy nomad vampires look hungry.

That's it, folks. What did you think of the season finale?

The Bachelorette
Bachelorette Fans Have Found a Bunch of Cast Lookalikes, and You Can't Unsee Them
by Amanda Prahl 39 minutes ago