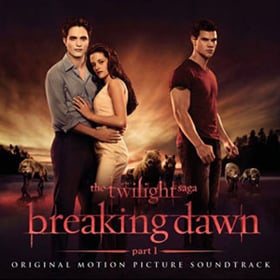 The official track listing and album art for the Breaking Dawn soundtrack are here! As is custom for the Twilight movies, the soundtrack is full of up-and-coming indie artists like The Joy Formidable, Theophilus London, and Noisettes, and there's also an appearance from pop star Bruno Mars. Fans of the original Twilight film will be happy to see that Iron & Wine's "Flightless Bird, American Mouth" — aka Edward and Bella's prom slow-dance song — is also here, but updated into a wedding version, an idea I kind of love. Cast member Mia Maestro also contributes a track. The songs aren't available to listen to quite yet, but check out the full list of songs after the jump.

Netflix
The Trial of the Chicago 7: See How the Movie's Cast Compares to the Real People
by Amanda Prahl 12 hours ago