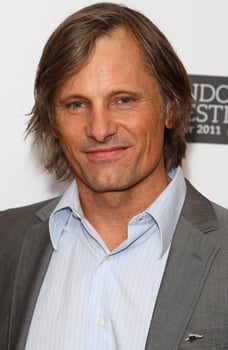 Viggo Mortensen is currently in Spain starring in a production of Purgatorio, but his A Dangerous Method just opened here in the US to quite good reviews. We had a chance to ask Viggo about tackling the role of Sigmund Freud opposite Michael Fassbender and Keira Knightley. He also gave us some random tidbits about his life like his favorite books and holiday dishes, and even spoke about working with Kristen Stewart in their upcoming On the Road. Viggo kindly cleared up any confusion movie-goers might have about the adaptation of Jack Kerouac's classic book and his 2009 movie with Charlize Theron called simply The Road. He said:

BuzzSugar: One of your next films coming out is On the Road. How was it filming that movie with Kirsten Dunst, Kristen Stewart, and Tom Sturridge?
Viggo Mortensen: Of the three actors you mention, I only worked with Kristen Stewart, who did a great job with her character from what I could see. Walter Salles, the director, has a light touch and is very kind, extremely intelligent, and very helpful with the actors. Great crew on that shoot. The images I have seen are strikingly beautiful; they really capture post-WW2 USA landscapes, people.

Buzz: As for A Dangerous Method, what did you think when you first saw yourself dressed up as Sigmund Freud?
VM: I thought: "Yes, this might work; looks right so far. Now I have to find the character's voice, his tone."

Buzz: What's on tap for you at the end of 2011?
VM: I am finishing the run of the Ariel Dorfman play Purgatorio, which I am acting in at the Matadero theatre in Madrid, Spain. Been a tough but rewarding challenge after more than 20 years not doing a play. Tough subject, difficult script to memorize and present. Has gone well — full houses and good reviews — but will be glad to relax with friends and family a bit after we finish just before the holidays.

To see what Viggo had to say about his holiday plans and what he does in his spare time, just read more.

Buzz: Are there any holiday dishes you're especially excited to have?
VM: Buckwheat pancakes with fried eggs on top.

Buzz: What do you like to do best when not making movies?
VM: Watch other movies.

Buzz: Do you have a favorite book?
VM: No, not just one. Too many to mention. For those who do not know his work, I recommend Roberto Bolaño's novels. Been reading him lately. And Noam Chomsky's updated version of his landmark publication 9/11.

Buzz: Having also starred in The Road, how would you describe the difference between that film and On the Road to your fans?
VM: If you know the books, the only things that they have in common is the word "road" in their titles, the view of a few US roads onscreen, a little suffering, and a little joy to be had from the two journeys . . . The Road has a minimum of characters and barely any dialogue, while On the Road is full of memorable characters who will not or cannot shut up. Different as the two stories are, both books contain gems of concentrated poetic description, uniquely haunting passages that will likely stay with the reader for a long time.

Penn Badgley
Penn Badgley Explains Why Fans Prefer You's Joe Over Gossip Girl's Dan, and He May Be Right
by Naledi Ushe 3 days ago