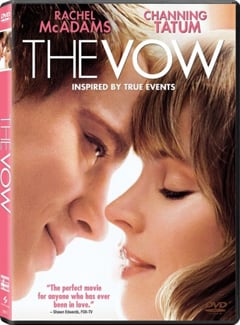 Channing Tatum stars in this romantic drama as Leo, the husband of a woman (Rachel McAdams) who has recently lost her memory in a traumatic car accident. Leo must painstakingly woo his wife back, as she has no recollection of the past four years in which they met, fell in love, and started a life together. Though the story is an interesting hook, the movie is more depressing than hopeful. The Vow does, however, give Tatum a chance to shine as a serious actor, and, of course, he's not bad to look at for two hours either. Extras include commentary by the director, deleted scenes, and a blooper reel.

Kate Beckinsale reprises her role as the leather-clad vampire Selene in the fourth installment of the sci-fi Underworld series. After escaping imprisonment, she isn't prepared to find that humans have not only discovered the existence of the vampire and Lycan clans, but have vowed to eradicate them from the earth. The DVD comes with an abundance of extras, including a special "Creating the Underworld: Picture-in-Picture Experience" viewing option, five featurettes, audio commentary, a blooper reel, and a music video for "Heavy Prey," one of the songs featured in the film.