It's no accident that The Vow's release date coincides almost perfectly with Valentine's Day. The film promises the kind of epic love story that many of us, like it or not, are more amenable to getting swept up in at this time of year: a man tries to make his wife fall in love with him again after a horrific accident leaves her with no memory of the last four years, or of him. Channing Tatum is endearing as Leo and though he has chemistry with Rachel McAdams's Paige, it almost goes to waste due to the film's lack of focus and uneven plot. 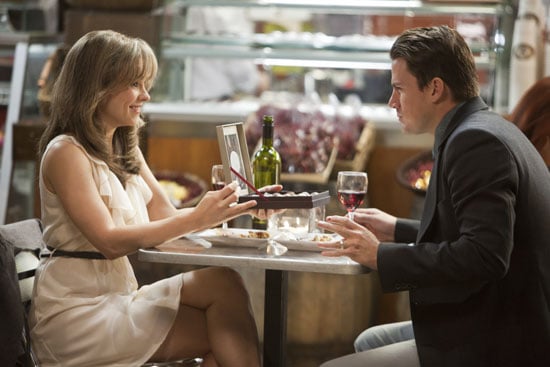 For starters, having a stranger for a husband is just the beginning of Paige's problems. Sometime in the four years she's lost, she went from being a preppy law student to a free-spirited artist. Naturally, when she wakes up, she wants an explanation for why she doesn't talk to her family anymore, what happened to her pretty boy fiancé (Scott Speedman), and why her hair is so "weird." It's understandable that she's a little different from who she used to be, but a complete life transformation is a bit hard to swallow — both for Paige, and for the audience.

To see why The Vow may not be the love story you're expecting, just read more.

Watching Tatum and McAdams play off each other is what keeps the movie engaging, and Tatum is particularly sympathetic. Though Paige is the one who has suffered the trauma, it's even more difficult to watch Leo quietly suffer as the love of his life continues to slip away in favor of the life she actually remembers. Leo represents a life that the new Paige is enticed by but can't imagine: he's goofy, laid-back, and immensely committed to her. But Paige can't come to terms with a life she doesn't feel part of, and instead reverts back to her former self.

The sincerity and sweetness that Tatum brings to Leo are reflected in flashbacks of his life with Paige and in his current attempts to win her back, but the film isn't the epic romance that it's packaged to be. In fact, it's more depressing than it is joyful; not only are most of the characters in pain throughout the film, but with the exception of Leo, most of them are downright irritating. Paige's family and friends couldn't be more stereotypically conservative, which only makes Paige's decision to stay with them all the more frustrating to watch. As the film goes on, the love story starts to take the backseat to her family issues, and the crux of the film rests on a subplot that's both lame and contrived.

The Vow is certainly watchable, thanks to the intrigue of the premise, and the mystery of how Leo and Paige will (inevitably, of course) find their way back to each other. But the film tries too hard to manufacture extra drama out of Paige's memory loss, when all the audience really wants to see is a love story to get swept up in.