Could Halloween night be any more appropriate for AMC's new zombie drama, The Walking Dead, to make its debut? I think not. I've been looking forward to the series, an adaptation of the graphic novels by Robert Kirkman, since he and the cast electrified the crowd at Comic-Con with footage and details about the show. Like the network's main standout Mad Men, the producers have promised a character-driven story, and not just a horror series. 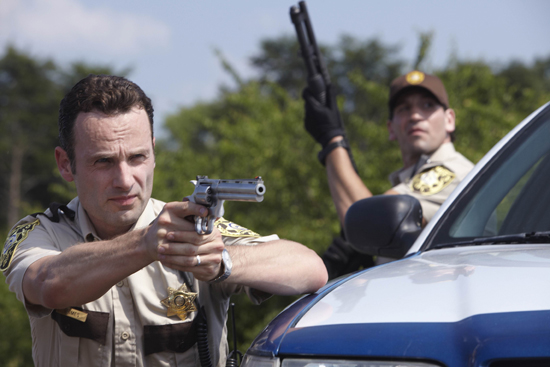 Here's why I'm sold: there's the trailer, which looks dramatic and spine-tingling, and then there's Love Actually's Andrew Lincoln, who plays the show's human hero, Rick Grimes. The only reservation I have is whether it'll be too gruesome for me to stomach (I guess I'll find out tonight when I watch the premiere). If you're not intrigued yet, watch this clip from the first episode when you read more.