Breaking Dawn stars Kellan Lutz and Ashley Greene have teamed up once again for the big screen, only this time around they're not playing platonic vampire siblings. Instead, the two star as romantic interests in A Warrior's Heart, a film that follows high school lacrosse star Conor Sullivan (Lutz) who begins to spiral out of control when he loses his father and gets kicked off his team. When his father's war buddy (Adam Beach) steps in to help the troubled teen cope, he enrolls Conor in a wilderness lacrosse camp and what looks like a predictable transformation begins to unfold. 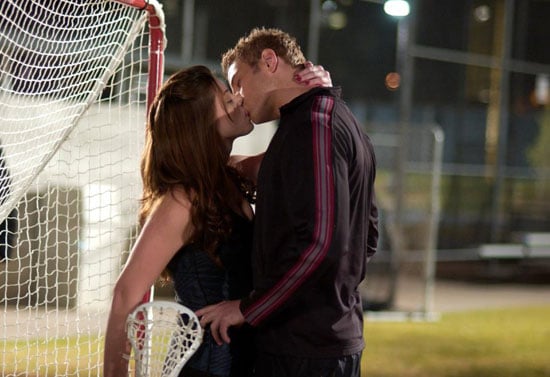 The combination of wilderness camp and lacrosse locker room scenes translate into shirtless shots of Lutz — plus fellow costar Chord Overstreet — but that's about the most exciting thing about the trailer. It's pretty clear Conor will redeem his reckless ways through a new connection with the roots of lacrosse (we get a brief history lesson on its Native American origins) and his love for Greene's character Brooklyn. Plus, there's so much going on here with the combination of sports, love, and coming-of-age stories that the film feels a little jumbled. See what you make of it when you watch the watch the trailer.