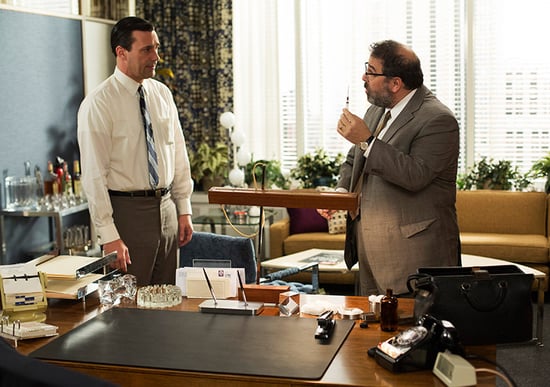 This week on Mad Men, Don and the cool kids in creative decide to get a little help from a "complex vitamin super dose" before a weekend of work on the Chevy account. Young-at-heart account exec Jim Cutler brings in his doctor, who proceeds to administer the upper drug into the backsides of the eager staff. The good doctor doesn't even blink twice before giving a dose to Roger Sterling, who discloses his heart condition. Although, we don't get to see what effect the drug has on Roger. I hope we find out next week.

While viewers don't explicitly know what the super dose consists of, we do see its impact. An injured Kenny Cosgrove breaks into a manic tap routine. Stan Rizzo races through the office and comes up with hundreds of "ideas." And Don Draper zooms past doors, talks a mile a minute, and becomes obsessed with coming up with something to say to his mistress, rather than focusing on the Chevy account. At least that's what it seems like he's talking about when he shares his pitch with Peggy: "Let's say I get her face to face. How do I capture her imagination?" So what is this drug that turns everyone into momentary geniuses who actually create sober gibberish? Probably amphetamines — aka speed.

If the Sterling Cooper Draper whatever-they're-called-now staff remind you of the kids in college who got hopped up on Adderall before a big deadline, it might be because they are hopped up on Adderall before a big deadline. Or something similar, at least. "Amphetamine salts combo," the technical term for what is known today as Adderall, was approved by the FDA in 1960. It then went under the name Obetrol. It and similar amphetamines, like dextroamphetamine and benzedrine, were popular at the time as diet pills, study aids, or party drugs. So it seems likely the Mad Men team would call on it increase their alertness and motivation. Other side effects include increased sex drive, which could explain Stan's come-on to Peggy and Wendy Gleason. And we saw quite a few of the negative side effects play out on Don, including fever, sweating, and insomnia.

In the 1960s, amphetamines were also used to stimulate American military men during the Vietnam War. However, they were not popular with many hippies and counterculture figures like The Beatles and Allen Ginsberg, who favored the more mellow drugs marijuana and LSD. Maybe Don Draper isn't all that cool after all.

Zara
25 New Zara Pieces That Will Sell Out by November, According to Shopping Pros
by Macy Cate Williams 11 hours ago