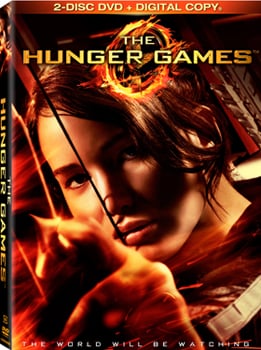 The Hunger Games comes out on DVD at midnight on Friday, and now's your chance to see the film if you missed it in theaters. The flick, an adaptation of Suzanne Collins's novel, is about a televised contest known as the Hunger Games, held by the ruthless government of Panem (aka a futuristic version of North America). It follows a young girl, Katniss Everdeen (Jennifer Lawrence), after she's been chosen to fight in the Games against other teens to the death. The movie is a pretty faithful adaptation that's exciting and well-acted, most notably because of lead actress Lawrence.

Aside from just being able to watch Katniss and Peeta battle for their lives in the comfort of your own home, you'll get a few extras on the disc as well. There is over three hours of bonus content, so read on to get a rundown of what you get when you buy The Hunger Games on DVD after the jump.