Season four of AMC's The Walking Dead premieres this weekend, so it's time for a little reminder of where we ended up and where we're going. It's been six months since the maddening season three finale, and the same amount of time will have passed on screen when we get back to the apocalyptic world of walkers as well. Even though we're looking forward to the upcoming action in season four, let's take a moment to go over where things left off in April's finale. 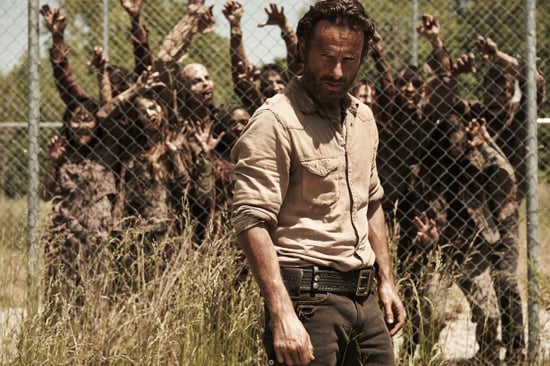 OK, granted, he couldn't just leave everyone in Woodbury to die, but taking them back to the prison isn't a great idea either. The crew is already handicapped by the one-legged Hershel, and the addition of so many helpless souls to keep track of means they'll be sitting ducks, even more so than before.

2. Andrea and Milton are both dead.

The Governor leaves a dying Milton and a brutalized Andrea in the same room together, and Andrea can only watch in horror and struggle to escape before Milton turns and comes after her. She's unfortunately not fast enough, and, in a shocking twist, Milton bites her before she can break free. She ends the episode taking her own life before she turns. With the death of yet another vital character, we can probably expect to see new personalities emerge, either from the outside world or from the Woodbury group.

Find out what else happens at the end of season three after the jump.

It's safe to say we were all a little shocked when Carl ruthlessly kills an innocent boy with little provocation. I guess that's what happens when you've been raised around guns and human/zombie violence. This might be an indication that Carl is heading down a dark path, and he might only get more reckless in the fourth season.

4. The prison is severely weakened and vulnerable.

In the wake of the Governor's attack on the prison, everything is in shambles. Guard towers have been decimated, and the gates have been more or less destroyed. The prison is now much more susceptible to attack, and even worse, all of the gunfighting has likely attracted any walkers within earshot. Plus, with the new crop of people coming in, supplies will dwindle even faster. At the same time, though, more people might mean a better chance at survival.

5. The Governor goes on a rampage and disappears.

If there ever was a doubt that the Governor wasn't a raving lunatic (hint: there pretty much never was a doubt), all hesitation is eradicated when he turns on his own team and kills almost all of them after the prison attack. After that, he takes off and we don't really know where he goes. That means it's only a matter of time before he strikes again.

Are you excited for the new season?